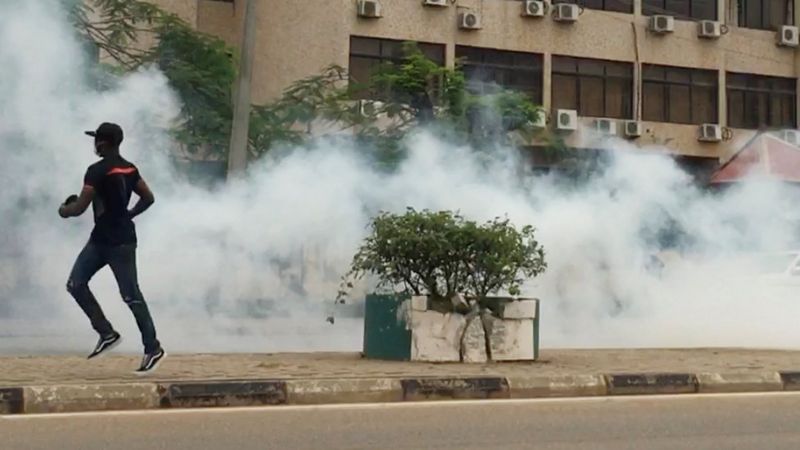 Nigerian police have fired tear gas at a protest against police brutality in the capital Abuja.

A video of a man allegedly being killed by police sparked the latest protests.

Several other protests have taken place across Nigeria, including Lagos. Star Wars actor John Boyega is among the celebrities supporting the protesters.

The hashtag #EndSARS was trending worldwide on Twitter on Friday with celebrities including the Nigerian superstars Wizkid and Davido tweeting their support for protesters.

More and more Nigerians started using the hashtag last Saturday following the alleged killing of a young man by officers from the Sars unit.

Many people were also using the hashtag to share stories of brutality attributed to the police unit.

On Sunday Nigeria's inspector general of police Mohammed Adamu banned the Sars unit from carrying out stop and search duties and setting up roadblocks.

He also said members of Sars must always wear uniforms and promised the unit would be investigated.

Gunshots heard
On Friday protesters marched to the police headquarters in Abuja.

An eyewitness, protester Brian Dennis, told the BBC that police used tear gas and some protesters were beaten up.

Videos shared on Twitter appear to show protesters running away from tear gas.

Another protester Anita Izato said she heard gunshots and protesters ran to safety.

It is the second day of protests against the police in Nigeria and in the biggest city, Lagos, protesters slept overnight outside government house.

2px presentational grey line
Why are young Nigerians so angry about Sars?

The Nigerian police have a reputation for corruption, brutality and little regard for human rights.

But people here have even stronger feelings against Sars, which has developed notoriety for unduly profiling young people.

Those considered "flashy" often attract the Sars officers' attention and very few walk away without having to hand over money. Many get arrested or jailed on trumped-up charges while others have been killed.

Celebrities such as Wizkid and Davido are getting involved because their young fans constitute the bulk of those harassed by the police.

The young people who are marching feel more determined than ever before to get Sars abolished.

The government has failed to act on promised reforms in the past but this level of protest will be harder for the politicians to ignore.

2px presentational grey line
Slow to change
Boyega, who has Nigerian heritage, tweeted his frustration at an apparent lack of change within the police.

The #EndSARS hashtag is thought to have been first used in 2018.

The National Human Rights Commission published a report into the activities of Sars in May 2019 but critics say little appears to have changed.

An investigation by the rights group Amnesty International published in June accused Sars officers of using "torture and other ill-treatment to execute, punish and extract information from suspects".

Amnesty found the group allegedly targeted men between the ages of 17 and 30.