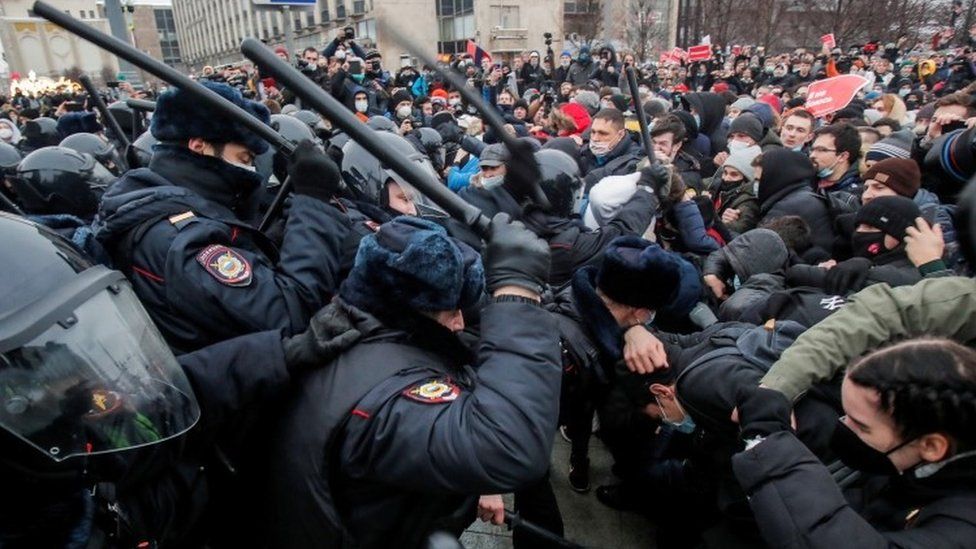 Russian authorities have closed metro stations and are restricting movement in Moscow ahead of planned rallies in support of jailed opposition leader Alexei Navalny.

Many restaurants and shops in the city centre will be closed and overground transport will be diverted.

More than 4,000 people were arrested across Russia during rallies last week.

Mr Navalny was jailed on his return to Russia after recovering from an attempt to kill him with a nerve agent.

The opposition figure was arrested on 17 January for not complying with a suspended sentence. He had only just arrived from Berlin, where he spent months recovering from the near-fatal attack.

Russian authorities say he was supposed to report to police regularly because of a suspended sentence for embezzlement.

Mr Navalny has denounced his detention as "blatantly illegal", saying the authorities knew he was being treated in Berlin for the Novichok poisoning, which happened in Russia last August.

What's the latest?
Mass rallies in support of Mr Navalny are expected across Russia on Sunday, despite fresh police warnings about gatherings.

A number of close associates of Mr Navalny have been detained since last week and others, including his brother and Pussy Riot activist Maria Alyokhina, have been put under house arrest.

The chief editor of a Russian website specialising in human rights, Sergei Smirnov, was also arrested outside his home on Saturday. News of his detention, apparently over allegations he participated in last week's protests, has been condemned by other journalists.

In Moscow, police have reportedly been struggling to find space in jail for supporters of the opposition leader.

Seven metro stations will be closed in Moscow on Sunday and movement of pedestrians will be limited in the city centre, the AFP news agency reports.

Protests are also expected in other areas of the country, despite temperatures dropping to -52C.

In the city of Vladivostok, in Russia's far east, Mr Navalny's team say there have been no demonstrations on the scale of last Saturday for over a decade.

Mr Navalny blamed state security agents under Mr Putin's orders for the Novichok attack which nearly killed him. Investigative journalists from the Bellingcat website have named Russian FSB agents suspected of the poisoning.

The Kremlin denies involvement and disputes the conclusion, by Western weapons experts, that Novichok was used.