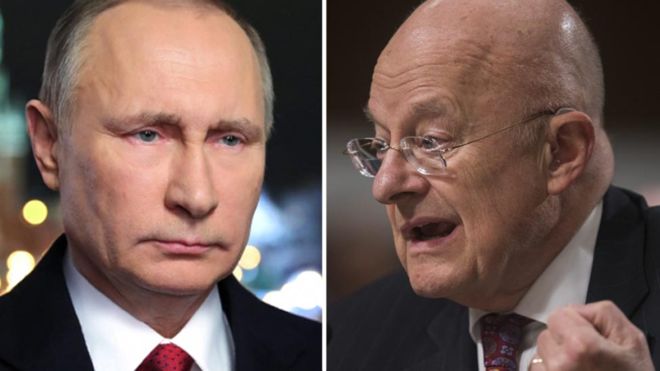 The US intelligence chief has promised to explain why Russia allegedly meddled in the US presidential election.

But Mr Clapper stopped short of saying it was "an act of war".

Russia has denied involvement but the US has announced sanctions against Russian officials.

A report on foreign meddling in US elections was given to President Barack Obama on Thursday.

President-elect Donald Trump is to be briefed on the report on Friday and the unclassified version will be made public next week.

Mr Clapper described the Russian efforts as a "multifaceted campaign", which featured "classical propaganda, disinformation, [and] fake news". (via: BBC).

In joint testimony prepared for the hearing, officials said Russia had an advanced cyber-programme that posed a major threat to a wide range of US interests.

"Russia is a full-scope cyber-actor that poses a major threat to US government, military, diplomatic, commercial and critical infrastructure," the testimony said.

It was written by Mr Clapper, Marcel Lettre, Undersecretary of Defense for intelligence, and Admiral Michael Rogers, director of the National Security Agency.

Senator McCain, in opening the session, reminded the panel that they were not there to "question the outcome of the presidential election".