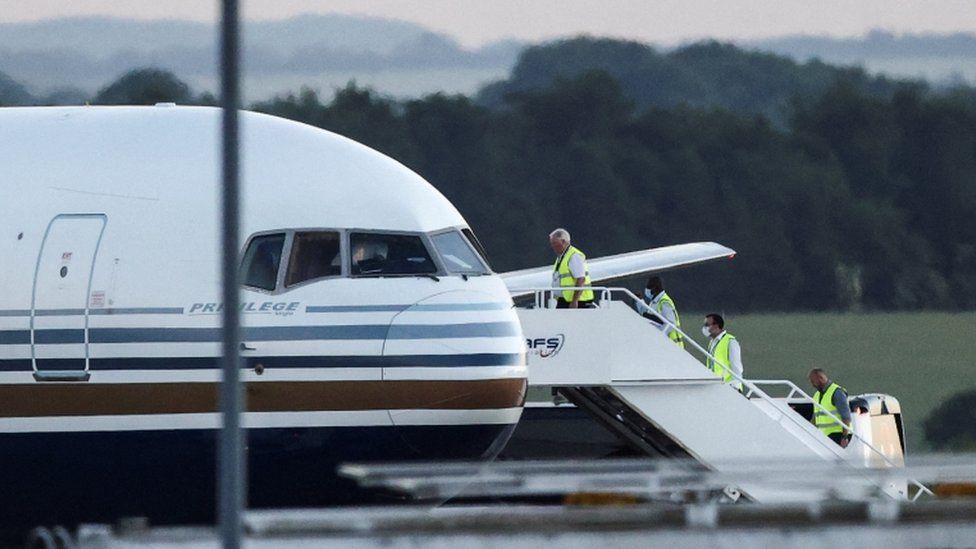 Preparations are under way for the next flight to take asylum seekers from the UK to Rwanda, the government has said.

The first flight was cancelled minutes before take-off on Tuesday evening.

A late intervention from the European Court of Human Rights (ECHR) led to fresh challenges in the UK courts.

Work and Pensions Secretary Therese Coffey said the government was "surprised and disappointed" with the ruling but "lawyers in the Home Office are already working on the next steps".

"I know officials will already be preparing for the next flight", she said, explaining the government's aim was to create "safe legal routes for people to get asylum".

Human rights lawyer Geoffrey Robertson QC, who represented the lead case before the ECHR on Rwanda, said "One of the things that makes Britain great… is that we will abide by international courts and international law."

The Rwanda asylum plan, announced by the government in April, intends to take some asylum seekers who cross the Channel to the UK on a one-way ticket to Rwanda to claim asylum there instead. The government said the scheme would discourage others from crossing the Channel.

Up to seven people had been expected to be removed to Rwanda on the Boeing 767, chartered at an estimate cost of £500,000, on Tuesday evening.

Home Secretary Priti Patel said she was "disappointed" with the ruling but added: "Preparation for the next flight begins now."

The flight had been due to take off at 22:30 BST from a military airport in Wiltshire on Tuesday, but a judgement from the ECHR in Strasbourg halting the deportation of one of the men arrived at just after 19:30.

The Strasbourg human rights court - which is not a European Union body but is part of the Council of Europe, which still has the UK as a member - said an Iraqi man known as KN faced "a real risk of irreversible harm" if he remained on the flight.

The court said he should not be sent to Rwanda until the full decision on whether the government's policy is legal is made by the Supreme Court, which is due in July.

Ms Coffey said it was "important" the government considered the ruling, which prevented the first flight of asylum seekers being flown to Rwanda.

She said the government "anticipated there would be plenty of legal challenges" and it would "rigorously defend" the policy.

"We have a good track record and we want to make sure we deter unsafe illegal routes of entry into this country while maintaining routes that are safe and legal," she told the BBC.

Some 444 migrants were detected crossing the English Channel in small boats on Tuesday, the Ministry of Defence said.

Ms Patel said "many of those removed from this flight will be placed on the next" and the "repeated legal barriers" were similar to those faced by the government on other deportations.

The Rwandan government said it was "not deterred" by the failure of the first flight to depart and it remained committed to the deal with the UK.

Meanwhile, Labour's shadow foreign secretary described the Rwanda asylum scheme as "unworkable" and "unethical" and said he was worried how much it would cost.

The ECHR "protects all our rights" and it was a "grave thing" to suggest the court should not look at the scheme properly, David Lammy told BBC Breakfast.

Lawyer Mr Robertson, from Doughty Street Chambers, told the BBC the government had a number of choices including asking the court to lift the measures, fighting the judicial review or bringing a new law to Parliament.

He said "lawyers at many chambers" took the case to the ECHR and it decided the government should not deport any individuals "until the judicial review had concluded and had approved the lawfulness of the policy".

"So it shouldn't have come as any surprise to the government because it's well known that when domestic remedies in the British courts are exhausted you can go to the European court."

Another human rights lawyer who represents a man facing deportation to Rwanda said she understood people's frustration that the flight was cancelled - but that she hoped they wouldn't want to do something illegal.

"I can understand their frustration if I try to put myself in their shoes", Frances Swaine told BBC Breakfast.

"An assessment will need to be made on whether or not they can legally transport anybody else before there is a proper hearing in July about the policy itself."

Alp Mehmet from Migration Watch UK, which campaigns for lower immigration into the UK, said it was "absolutely outrageous" the flight was cancelled.

The public "urgently" wants the UK Parliament and courts to decide "and not remote human rights judges", he said.