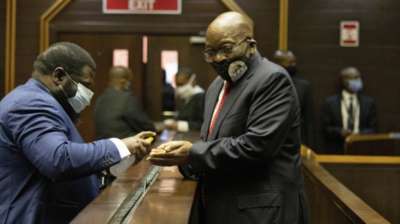 The High Court in Pietermaritzburg has cancelled an arrest warrant against South Africa's former President Jacob Zuma after his lawyer handed in a doctor's letter confirming his ill-health.

The arrest warrant was issued in February after Mr Zuma failed to appear in court for a hearing.

His legal team had said the former president had gone to Cuba for a medical procedure, but the court was not satisfied with the explanation.

Pre-trial proceedings began on Tuesday regarding the corruption trial in which Mr Zuma is accused of receiving bribes from French arms company Thales 20 years ago.

The hearing has now been postponed to September.