Sri Lanka crisis is a warning to other Asian nations 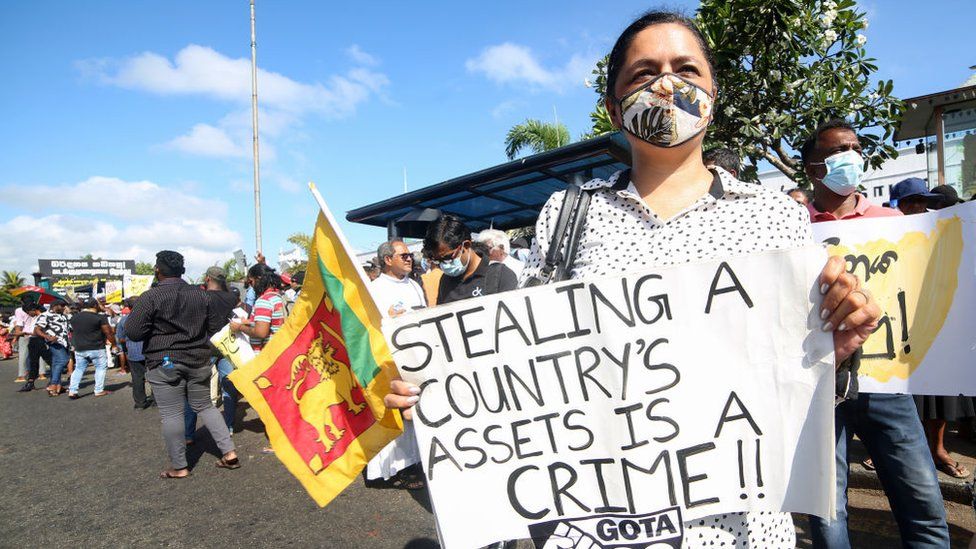 Sri Lanka is in the midst of a deep and unprecedented economic crisis that has sparked huge protests and seen its president quit after fleeing the country - but other countries could be at risk of similar troubles, according to the head of the International Monetary Fund (IMF).

She said developing nations had also been experiencing sustained capital outflows for four months in a row, putting their dreams of catching up with advanced economies at risk.

Sri Lanka is struggling to pay for crucial imports like food, fuel and medicine for its 22 million people as it battles a foreign exchange crisis. Inflation has soared about 50%, with food prices 80% higher than a year ago. The Sri Lankan rupee has slumped in value against the US dollar and other major global currencies this year.

Many blame ex-President Gotabaya Rajapaksa for mishandling the economy with disastrous policies whose impact was only exacerbated by the pandemic.

Over the years, Sri Lanka had built up a huge amount of debt - last month, it became the first country in the Asia Pacific region in 20 years to default on foreign debt.

Officials had been negotiating with the IMF for a $3bn (£2.5bn) bailout. But those talks are currently stalled amid the political chaos.

China has been a dominant lender to several of these developing nations and therefore could control their destinies in crucial ways. Buy it's largely unclear what Beijing's lending conditions have been, or how it may restructure the debt.

Where China is at fault, according to Alan Keenan from International Crisis Group, is in encouraging and supporting expensive infrastructure projects that have not produced major economic returns.

"Equally important has been their active political support for the ruling Rajapaksa family and its policies... These political failures are at the heart of Sri Lanka's economic collapse, and until they are remedied through constitutional change and a more democratic political culture, Sri Lanka is unlikely to escape its current nightmare."

Worryingly, other countries appear to be on a similar trajectory.

Laos
The landlocked East Asian nation of more than 7.5 million people has been facing the risk of defaulting on its foreign loans for several months.

Now, a rise in oil prices because of the Russian invasion of Ukraine has put further strain on fuel supplies, pushing up the cost of food in a country where an estimated third of people live in poverty.

Local media outlets have reported long lines for fuel, and said some households had been unable to pay their bills.

Laos' currency, the kip, has been plunging and is down by more than a third against the US dollar this year.

Higher interest rates in the US have strengthened the dollar, and weakened local currencies, increasing their debt burden and making imports costlier.

Laos, which is already heavily in debt, is struggling to repay those loans or or pay for imports like fuel. The World Bank says the country had $1.3bn of reserves as of December last year.

But its total annual external debt obligations are around the same amount until 2025 - equivalent to about half of the country's total domestic revenue.

As a result, Moody's Investor Services last month downgraded the communist-ruled nation to "junk", a category in which debt is considered high risk.

China has loaned Laos huge amounts of money in recent years to fund big projects like a hydropower plant and a railway. According to Laotian officials speaking to Chinese state news agency Xinhua, Beijing has undertaken 813 projects worth more than $16bn last year alone.

Laos' public debt amounted to 88% of its Gross Domestic Product (GDP) in 2021, according to the World Bank, with almost half of that figure owed to China.

Experts point to years of economic mismanagement in the country, where one party - the Lao People's Revolutionary Party - has held power since 1975.

But Moody's Analytics has flagged increased trade with China and the export of hydroelectricity as positive developments. "Laos has a fighting chance of avoiding the danger zone and the need for a bailout," economist Heron Lim said in a recent report.

Fuel prices in Pakistan are up by around 90% since the end of May, after the government ended fuel subsidies. It's trying to rein in spending as it negotiates with the IMF to resume a bailout programme.

The economy is struggling with the rising cost of goods. In June, the annual inflation rate hit 21.3%, the highest it has been in 13 years.

It has imposed a 10% tax on large-scale industry for one year to raise $1.93bn as it tries to reduce the gap between government revenue and spending - one of the IMF's key demands.

"If they are able to unlock these funds, other financial lenders like Saudi Arabia and the UAE [United Arab Emirates] may be willing to extend credit," Andrew Wood, sovereign analyst at S&P Global Ratings told the BBC.

Former Prime Minister Imran Khan who vowed to fix some of these problems, was ousted from power although the faltering economy is not the only reason for that.

Last month, a senior minister in Pakistan's government asked citizens to reduce the amount of tea they drink to cut the country's import bills.

Again China plays a role here, with Pakistan reportedly owing more than a quarter of its debt to Beijing.

"Pakistan appears to have renewed a commercial loan facility vis-a-vis China and this has added to its foreign exchange reserves and there are indications they will reach out to China for the second half of this year," Mr Wood added.

The Maldives has seen its public debt swell in recent years and it's now well above 100% of its GDP.

Like Sri Lanka, the pandemic hammered an economy that was heavily reliant on tourism.

Countries that depend so much on tourism tend to have higher public debt ratios, but the World Bank says the island nation is particularly vulnerable to higher fuel costs because its economy is not diversified.

US investment bank JPMorgan has said the holiday destination is at risk of defaulting on its debt by the end of 2023.

Inflation hit an 8-year high in May in Bangladesh, touching 7.42%.

With reserves dwindling, the government has acted fast to curb non-essential imports, relaxing rules to attract remittances from millions of migrants living overseas and reducing foreign trips for officials.

"Bangladesh has had to re-prioritise government spending and impose restrictions on consumer activities," he said.

Rising food and energy prices are threatening the pandemic-battered world economy. Now developing nations that have borrowed heavily for years are finding that their weak foundations make them particularly vulnerable to global shockwaves.