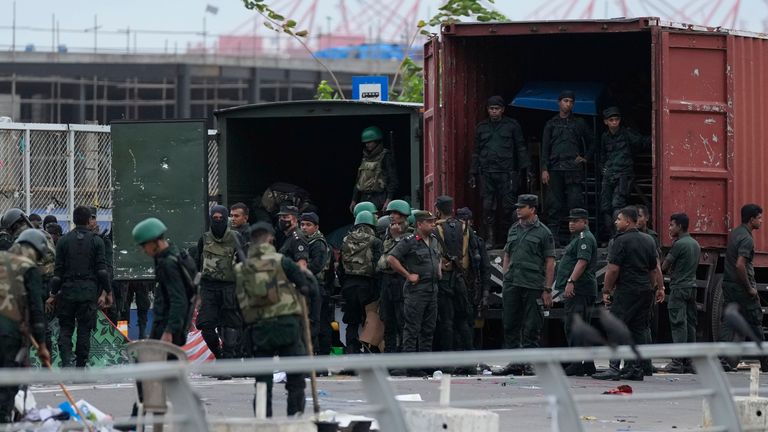 Hundreds of troops and police commandos moved on the protesters outside the presidential offices in Colombo, hours before they were due to leave the area.

A BBC video journalist was beaten by the army and one soldier snatched his phone and deleted videos.

Nine people, including two who are injured, have been arrested by police.

It comes as Ranil Wickremesinghe was sworn in as president on Thursday, after ex-president Gotabaya Rajapaksa fled the country last week.

Mr Wickremesinghe - the former prime minister - is seen as deeply unpopular with the public, and has vowed tough action against demonstrators.

Sri Lanka has seen months of mass unrest over an economic crisis, and many blame the former government for mishandling the nation's finances.

Protests had remained peaceful after Mr Wickremesinghe had been sworn into office on Wednesday. Despite deep distrust, many demonstrators had said they would give him a chance to lead the country out of its economic crisis.

In remarks after his inauguration, he said any attempt to topple the government or occupy government buildings was not "not democracy, it is against the law".

On Friday morning, security forces moved in on the protest camp and reclaimed the building from demonstrators, who had earlier pledged to hand the building back.

Police described the incident as a "special operation to take [back] control of the presidential secretariat".

When asked about the attack on the BBC journalist, one police spokesman said he was unaware of the incident.

The raid took place in the early hours of Friday, at around 01:00 local time (19:30 GMT Thursday). Security forces later completely sealed off a section of the road leading to the site.

When we heard that troops might be raiding the anti-government protest site in Colombo after midnight, we went to the spot just in front of the Sri Lankan president's office.

When activists raised objections to their presence, the security personnel marched on and became aggressive. The protesters were pushed back.

Within seconds, we saw soldiers shouting, dismantling and destroying make-shift tents and other items on the pavement. Troops also moved into the president's office which was stormed by huge crowds last week.

Activists had earlier said they would hand over the building on Friday afternoon. As we followed the soldiers, we could see they were clearing everything in their way.

The protesters were pushed up to the designated protest site less than 100m away and steel barricades were set up to stop the activists.

Though I explained to them we were journalists and simply doing our job, they wouldn't listen. My colleague was attacked further and we raised strong objections. The mic of another BBC colleague was taken and thrown away.

The phone was returned after the videos were deleted from the device. Another army officer intervened and let us go.

My colleague was shaken but was able to walk back to the hotel, a few hundred metres away.

The BBC tried to get a response from the military and police on the attack, but no-one answered our calls. A state of emergency declared last week is still in place.

The government's violence against protesters has already been criticised by civil and legal groups.

"Unnecessary use of brute force will not help this country and its international image," said the nation's Bar Association leader, Saliya Peiris in a statement.

The British High Commissioner to Sri Lanka, Sarah Hulton, also expressed concerns about the reports from the protest site.

"We have made clear the importance of the right to peaceful protest," she tweeted.

Sri Lanka has been wracked with protests for months because the country is effectively bankrupt and facing acute shortages of food, fuel and other basic supplies.

The country is currently in a state of emergency, which gives police and military the power to arrest and detain people without warrants.

It also allows for the detention of people without proof or the presumption of innocence, and severely restricts fundamental rights such as the freedom of movement and expression.

Sri Lanka: The basics
Sri Lanka is an island nation off southern India: It won independence from British rule in 1948. Three ethnic groups - Sinhalese, Tamil and Muslim - make up 99% of the country's 22 million population.
One family of brothers has dominated for years: Mahinda Rajapaksa became a hero among the majority Sinhalese in 2009 when his government defeated Tamil separatist rebels after years of bitter and bloody civil war. His brother Gotabaya, who was defence secretary at the time and later became president, fled the country after mass unrest.
Presidential powers: The president is the head of state, government and the military in Sri Lanka, but does share a lot of executive responsibilities with the prime minister, who heads up the ruling party in parliament.
Now an economic crisis has led to fury on the streets: Soaring inflation has meant some foods, medication and fuel are in short supply, there are rolling blackouts and ordinary people have taken to the streets in anger, with many blaming the Rajapaksa family and their government for the situation.