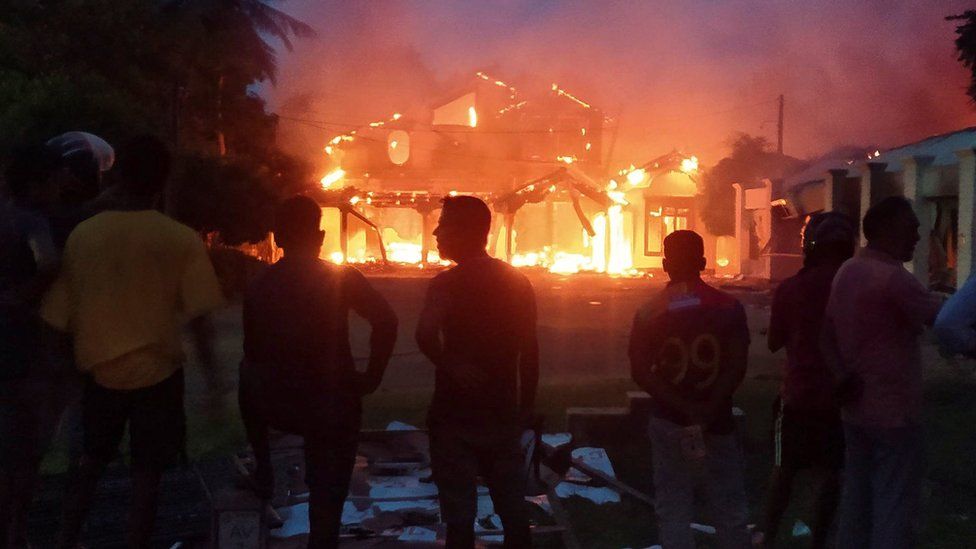 Angry mobs in Sri Lanka have burned down several homes belonging to the ruling Rajapaksas and MPs, after they were attacked by government supporters.

The violence capped a day of unrest that saw PM Mahinda Rajapaksa quit amid mass protests at his government's handling of the economic crisis.

But it failed to calm demonstrators, who attempted to storm his official residence while he was still inside.

Seven people have died and more than 190 have been injured since Monday.

An island-wide curfew has been extended to Wednesday morning as authorities seek to quell the violence.

Many are still calling for President Gotabaya Rajapaksa, brother of Mahinda, to leave office, following weeks of escalating demonstrations over soaring prices and power cuts since last month.

On Monday, government supporters clashed violently with protesters in the capital Colombo outside Mahinda Rajapaksa's Temple Trees residence, and then at the main protest site at Galle Face Green.

Police and riot squads were deployed, and tear gas and water cannons were fired at government supporters after they breached police lines and attacked protesters using sticks and poles.

Angry demonstrators retaliated, attacking government supporters and targeting ruling party MPs, including one who shot two people after a mob swarmed his car and then killed himself, according to Sri Lankan police.

As the night went on, mobs of protesters across the country torched houses belonging to the Rajapaksas, various ministers and MPs. This included a house turned into a controversial museum by the Rajapaksas in the family's ancestral village in Hambantota in southern Sri Lanka.

Areas near the president's official residence were also set ablaze, according to reports.

Following Mahinda Rajapaksa's resignation, protesters attempted to breach the inner compound of Temple Trees where he was staying along with several loyalists, and set fire to a bus outside the home. Police fired shots in the air and tear gas in an attempt to disperse them.

Elsewhere in Colombo, tensions remained high. Men armed with sticks and rods had established road blocks on the routes leading to and from the airport, and police and security forces - usually a common sight in the area - were nowhere to be seen, reports the BBC's Anbarasan Ethirajan.

Sri Lanka is facing its worst economic crisis since gaining independence from Britain in 1948, and people are furious because the cost of living has become unaffordable.

The country's foreign currency reserves have virtually run dry, and people can no longer afford essential items including food, medicines and fuel.

The government has requested emergency financial help. It blames the Covid pandemic, which all but killed off Sri Lanka's tourist trade - one of its biggest foreign currency earners. But many experts say economic mismanagement is also to blame.