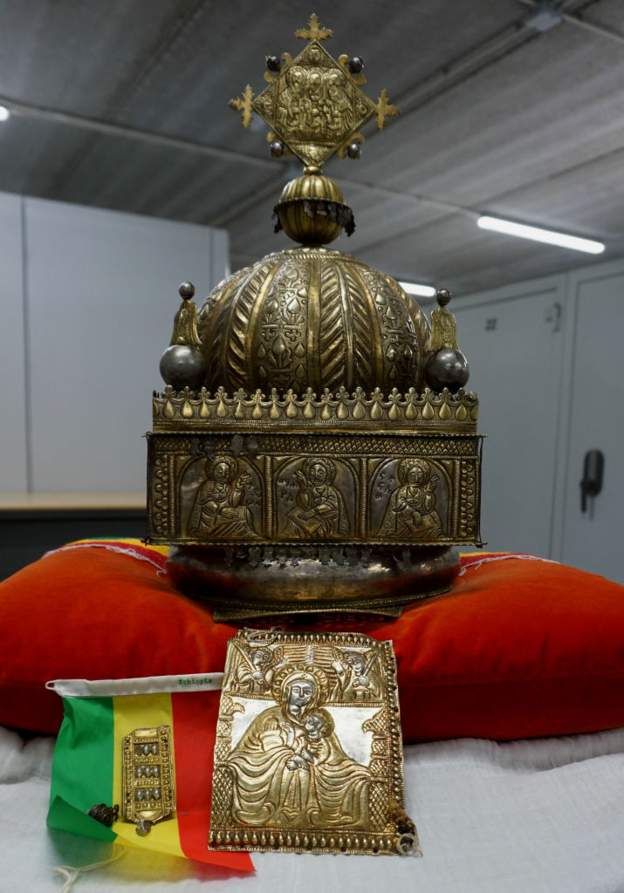 The crown was discovered in a flat in the Netherlands
Shares

The Ethiopian government has received an 18th Century crown that had been stolen then hidden in a flat in the Netherlands for 21 years.

The crown is thought to be one of just 20 in existence. It has depictions of Jesus Christ, God and the Holy Spirit, as well as Jesus' disciples, and was likely gifted to a church by the powerful warlord Welde Sellase hundreds of years ago.

Ethiopian Sirak Asfaw, who lives in the Netherlands, discovered the crown in the suitcase of a visitor he was hosting.

Upon realising that it was stolen he held onto it until 2018 when Prime Minister Abiy Ahmed was elected to office. He then reached out to art historian Arthur Brand and Dutch police to help keep it safe until its return home to Ethiopia.

On Thursday, Mr Abiy tweeted photos of him receiving the crown from a delegation that included Dutch Minister for Foreign Trade and Development Cooperation Sigrid Kaag:

Today #Ethiopia receives a precious crown stolen several years ago and taken to the #Netherlands. I am grateful to Sirak Asfaw and the Netherlands government for facilitating its return. @NLinEthiopia @Landoforigins pic.twitter.com/BDwdaoo7io