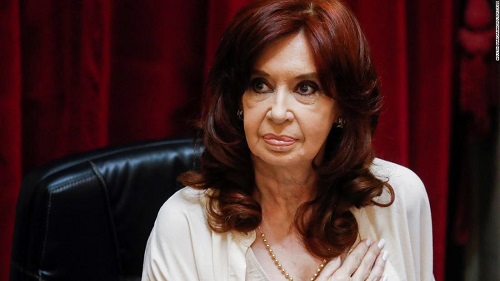 A man has been arrested after attempting to shoot Cristina Fernández de Kirchner, Argentina's Vice-President and former President, at point blank range outside her home in Buenos Aires on Thursday.

Video of the incident shows the vice president smiling as she walks by a crowd of people. A man in the crowd then surges forward, pointing a gun at Fernández de Kirchner's face and apparently attempting a shot.

No bullets are fired and the two-time former President flinches backward, unharmed.

The attacker was taken into custody after a few seconds of confusion and panic.

A frame from a video released by TN Argentina highlights the moment when a man pointed a weapon at Argentina Vice President Cristina Fernandez de Kirchner.

A frame from a video released by TN Argentina highlights the moment when a man pointed a weapon at Argentina Vice President Cristina Fernandez de Kirchner.

The Argentine Ministry of Security confirmed the weapon used in the incident was a .380 firearm with bullets inside.

"Cristina is still alive because -- for some reason we can't technically confirm at this moment -- the weapon, which was armed with five bullets, did not shoot although the trigger was pulled," said Argentine President Alberto Fernández in a televised address Thursday evening.

He called the assassination attempt an attack on democracy, saying, "We must eradicate hate and violence from our media and political discourse." He declared Friday a national holiday for the country to rally together in support of Fernández de Kirchner.

Police stand guard outside the residence of Cristina Fernandez de Kirchner in Buenos Aires on September 1.

Police stand guard outside the residence of Cristina Fernandez de Kirchner in Buenos Aires on September 1.

Former Argentine President Mauricio Macri also renounced the attack on Thursday, calling for an "immediate and profound clarification by the justice system and the security forces."

Fernández de Kirchner is among Argentina's most prominent political figures, having served as President from 2007 to 2015, before taking office as vice president in 2019.

Her supporters have been holding rallies outside her home for several days, in response to an ongoing trial in which she is accused of corruption during her term as President.

Earlier in August, a federal prosecutor called for Fernández de Kirchner to serve a 12-year prison sentence. The court is yet to rule on the request.

Days later, her supporters clashed with police in the Argentine capital, with Télam reporting police used sticks and tear gas on protesters after a group of people knocked down fences near her home.

Police work behind a security cordon after a man pointed a gun at Argentine Vice-President Cristina Fernandez de Kirchner outside her residence in Buenos Aires on September 1.

Police work behind a security cordon after a man pointed a gun at Argentine Vice-President Cristina Fernandez de Kirchner outside her residence in Buenos Aires on September 1.

During the national address on Thursday, President Fernández said he had been in touch with the judge assigned to the case to act as quickly as possible.

Argentina has been roiled by demonstrations this summer, with thousands taking to the streets protesting the administration's management of soaring inflation and corruption allegations.

In 2016 a judge indicted Fernández de Kirchner along with 11 others on charges of corruption, illicit association, and aggravated fraudulent administration, freezing $643 million of her assets.

Fernández de Kirchner was charged for allegedly directing public road works to a company called Austral Constructions during her presidency. At the time, she had criticized the investigation as being politically motivated.

She was also simultaneously on trial for another corruption case, in which she was accused of allegedly meddling with the sale of US dollars by the nation's central bank. The case was dismissed in 2021, with the court ruling in favor of Fernández de Kirchner, according to CNN affiliate CNN Español.