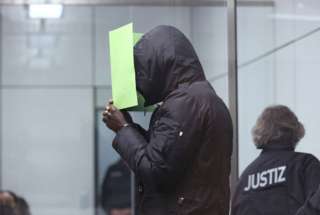 A trial has begun in Germany of a Gambian man accused of being part of a death squad that assassinated opponents of the West African country's former president, Yahya Jammeh.

The defendant, Bai Lowe, is accused of crimes against humanity and murder, including the killing 18 years ago of a journalist, Deyda Hydara.

Mr Lowe, 46, has previously confessed to being a driver with the hit squad known as the Junglers, which reported directly to Mr Jammeh. He has not yet entered a plea.

Outside the courtroom in the German town of Celle, activists called for the ousted Gambian leader and his accomplices to be brought to justice.

The trial is taking place on the basis of universal jurisdiction; it allows a foreign country to prosecute crimes against humanity, war crimes and genocide, regardless of where they were committed.