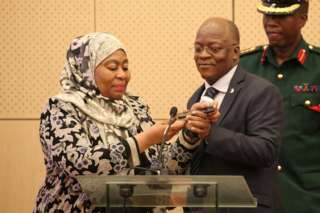 Tanzania’s President Samia Suluhu says she has in some circumstances handled the country’s top office better than other male presidents before her.

The Tanzanian president said she faced challenges of mistrust during her first days in office because she is a woman – which she had to overcome.

Ms Samia was speaking at a forum in the Ghanaian capital Accra – her first official trip to West Africa since she was sworn in as president following the death of her predecessor John Magufuli in March 2021.

“It was very difficult to make people of Tanzania trust me. That I can run the country in the same way men do - that was the major challenge,” she said during a session organised as part of the annual African Development Bank (AfDB) meeting.

“In the course of one year I have shown women’s power, I led the country the same way men did and in some circumstances better than they did,” she added.

The Tanzanian leader told the AfDB forum that the country's economic growth had dropped from 6.4% to 4% amid the Covid pandemic – but under her leadership it rose to 5.2% and was forecast to reach 6.7% by 2025.

Ms Samia will on Wednesday be awarded a trophy after being named the 2022 winner of the Africa Road Builders–Babacar Ndiaye Trophy last month.