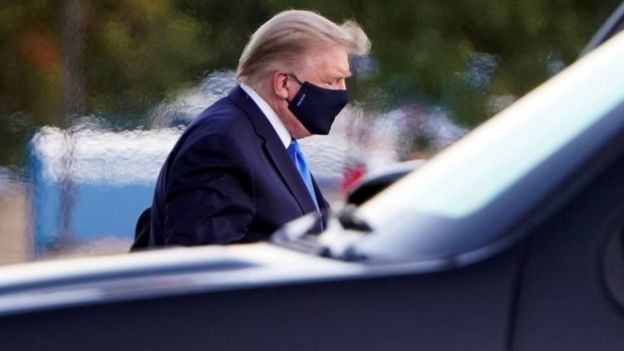 US President Donald Trump has been flown to hospital after testing positive for coronavirus.

His doctor said Mr Trump was "fatigued but in good spirits" and, in a later update, that he was doing well.

Mr Trump has so far been treated with an experimental drug cocktail injection and the antiviral medication Remdesivir after both he and First Lady Melania Trump tested positive for Covid-19.

In exactly one month, Mr Trump faces Joe Biden in the presidential election.

The president's diagnosis has upended his campaign and also cast doubt on his attempt to get a new Supreme Court judge confirmed before polling day.

The latest update from Mr Trump's physician, Sean Conley, in a memorandum late on Friday, read: "I am happy to report the president is doing very well." He said the president was not in need of supplemental oxygen.

Mr Trump was taken to hospital "out of an abundance of caution" and would be there for the "next few days", the White House said. His symptoms include a fever, sources have told US media.

How did the president look on Friday?
Wearing a mask and suit, Mr Trump walked out across the White House lawn on Friday at 18:15 (22:15 GMT) to his helicopter, Marine One, for the short flight to Walter Reed National Military Medical Center in the Washington DC suburbs.

He waved and gave a thumbs-up to reporters but said nothing before boarding the aircraft.

In an 18-second video posted to Twitter, Mr Trump said: "I think I'm doing very well. But we're going to make sure that things work out. The first lady is doing very well. So thank you very much."

The president's children, Ivanka and Eric, retweeted his post, praising him as a "warrior". Ms Trump added: "I love you dad."

Mr Trump was admitted to the presidential suite at Walter Reed, which is where US presidents usually have their annual check-up.

Shortly before midnight, he tweeted again: "Going well, I think! Thank you to all. LOVE!!!"

What treatment has the president received?
His doctor, Sean Conley, said the president was "not requiring any supplemental oxygen, but in consultation with specialists we have elected to initiate Remdesivir therapy. He has completed his first dose and is resting comfortably".

Tests have shown Remdesivir, originally developed as an Ebola treatment, disrupts the virus's ability to duplicate and can cut the duration of symptoms.

Earlier on Friday, Dr Conley said the president had "as a precautionary measure received an 8g dose of Regeneron's antibody cocktail" at the White House.

The antibodies stick to the coronavirus, protecting the body's cells and making the virus more visible to the immune system.

However, the treatment is still experimental and has not yet been approved by regulators. Although there is a lot of hope behind it, some doctors have expressed concern at its use on the president at this stage.

The president, being 74, a man and someone categorised as obese, is in a higher-risk category for Covid-19.

The first lady, who is 50, was said to be "well with only a mild cough and headache".

On Friday afternoon, Mrs Trump said she was experiencing mild symptoms but was "feeling good" and "looking forward to a speedy recovery".

The remainder of the Trump family, including the first couple's son Barron, who also lives at the White House, tested negative.