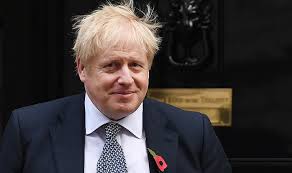 A pandemic of the novel coronavirus has now killed over 206,000 people worldwide.

More than 2.9 million people across the globe have been diagnosed with COVID-19, the disease caused by the new respiratory virus, according to data compiled by the Center for Systems Science and Engineering at Johns Hopkins University.

The actual numbers are believed to be much higher due to testing shortages, many unreported cases and suspicions that some governments are hiding the scope of their nationsâ€™ outbreaks.

Since the first cases were detected in China in December, the United States has become the worst-affected country, with more than 965,000 diagnosed cases and at least 54,877 deaths.

A week after being admitted to a London hospital for worsening coronavirus symptoms, Johnson was discharged on April 12 and continued to recuperate at home. He had spent three days in intensive care

The prime minister delivered a statement Monday morning for the first time since his battle with the novel coronavirus.

â€œIâ€™m sorry Iâ€™ve been away from my desk for much longer than I would have liked,â€ Johnson told reporters outside his official residence and office in London, 10 Downing Street. â€œIf this virus were a physical assailant, an unexpected and invisible mugger â€” which I can tell you from personal experience it is â€” then this is the moment when we have begun together to wrestle it to the floor.â€

More than 154,000 people in the United Kingdom have been diagnosed with COVID-19, and at least 20,795 have died from the disease, according to a count kept by Johns Hopkins University. Johnson said the country is making progress in its efforts to control the virus outbreak and there are â€œreal signs now that we are passing through the peak,â€ with the number of admissions to National Health Service hospitals down and fewer COVID-19 patients in intensive care.

â€œAnd thatâ€™s why we are now beginning to turn the tide,â€ he said. â€œWe collectively flattened the peak.â€

The prime minister acknowledged the impact the nationwide lockdown has had on the U.K. economy and its citizens, but he indicated it would be premature to start lifting the restrictions now.

â€œI can see the longterm consequences of lockdown as clearly as anyone,â€ he said. â€œAnd yet we must also recognize the risk of a second spike, the risk of losing control of that virus.â€

Johnson told reporters a new wave of infections and death would be an â€œeconomic disasterâ€ for the country.

â€œI refuse to throw away all the effort and sacrifice of the British people and to risk a second major outbreak and huge loss of life and the overwhelming of the NHS,â€ he said. â€œI ask you to contain your impatience because I believe we are coming now to the end of the first phase of this conflict.â€

Once officials are certain the first phase is over, the prime minister said, then it will be time to move onto the â€œsecond phaseâ€ in which the country continues to suppress the disease while beginning to gradually ease restrictions and reopen the economy.

â€œAnd in that process, difficult judgments will be made,â€ he added, â€œand we simply cannot spell out now how fast or slow or even when those changes will be made, though clearly the government will be saying much more about this in the coming days.â€