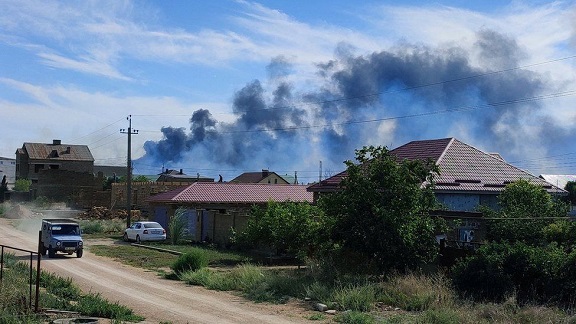 The war in Ukraine began with Crimea and must end with its liberation, President Volodymyr Zelensky has said.

Ukraine's president was speaking after a string of explosions hit a Russian airbase there, killing one person.

Mr Zelensky did not mention Tuesday's blasts but said: "Crimea is Ukrainian and we will never give it up."

Russia's defence ministry said ammunition detonated at the base. Meanwhile, Ukraine denied any responsibility for the explosions.

In a separate development, Ukrainian officials say 13 people were killed in overnight Russian strikes in the central Dnipropetrovsk region, and another one in the Zaporizhzhia region in the south.

Crimea is internationally recognised as part of Ukraine - but the Black Sea peninsula was annexed by Russia in 2014 after a referendum which the global community sees as illegitimate. Many Ukrainians see this as the start of their war with Russia.

On Tuesday, a series of explosions rocked the Saky military base near Novofedorivka, in the west of Crimea - which is near seaside resorts popular with Russian tourists.

Novofedorivka and Saky are about 50km (30 miles) north of the port of Sevastopol, home of Russia's Black Sea Fleet, which has been leading a blockade of the Ukrainian coastline. The airbase had been used by Russia to launch attacks on targets deep inside Ukraine.

Footage on social media showed beachgoers running as the explosions hit, with witnesses saying they had heard at least 12 blasts. Crimea's Russian-appointed health department said one civilian had been killed and another eight injured.

Russia's defence ministry insisted the blasts were down to ammunition that had exploded in a store and that there was no "fire impact" from outside - although this has not been independently verified.

And Ukrainian presidential aide Mykhailo Podolyak denied that Ukraine was behind the blasts, telling the Dozhd online television channel: "Of course not. What do we have to do with this?"

Any attack on Crimea by Ukraine would be considered deeply serious by Moscow. Russia sounded a warning last month when ex-President Dmitry Medvedev threatened last month that "Judgement Day will instantly await" if Ukraine targeted Crimea.

Mr Zelensky did not refer to the blasts in his speech late on Tuesday, but spoke at length about the peninsula, saying: "We will not forget that the Russian war against Ukraine began with the occupation of Crimea.

"This Russian war...began with Crimea and must end with Crimea - with its liberation," he said.

Mr Zelensky's latest remarks suggest he believes that Ukraine must retake the peninsula before the war can end - but in the past he has said different things on the issue.

He previously indicated Ukraine could accept peace if Russia returned to their positions before 24 February, meaning retaking Crimea could be a subject of further negotiations.