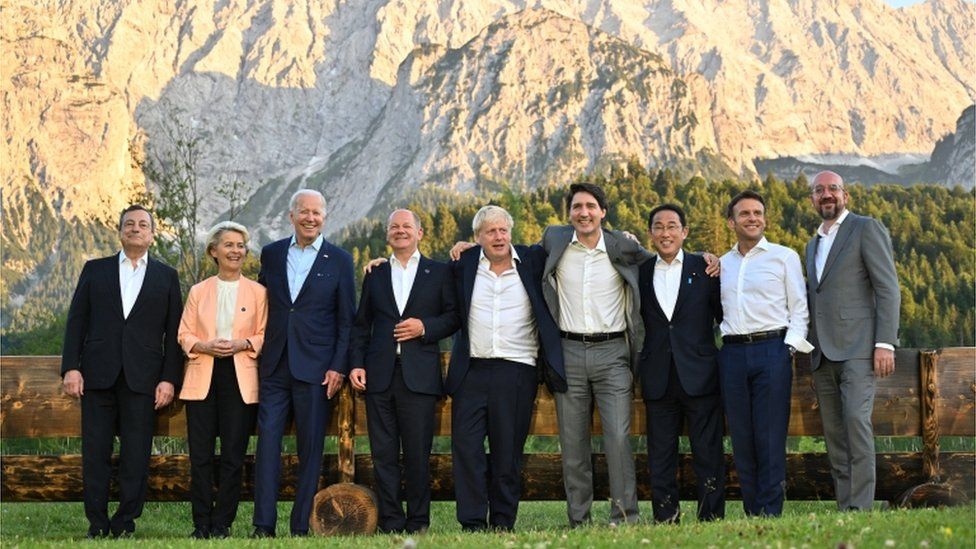 Ukraine's President Volodymyr Zelensky is expected to urge delivery of more heavy weapons when he addresses the G7 group of wealthy nations later.

It follows a barrage of Russian missile strikes on Kyiv and other areas over the weekend, which killed at least one.

In eastern Ukraine, Russia has taken full control of Severodonetsk and is targeting nearby Lysychansk.

On Sunday Mr Zelensky said delaying arms deliveries was "an invitation to Russia to strike again and again".

Speaking via his daily video address he also called for air defence systems and new sanctions on Russia.

"Partners need to move faster if they are really partners, not observers," he said.

The war in Ukraine is top of the G7 agenda and nations are expected to promise further military support for Kyiv and more sanctions on Moscow.

Western leaders are attempting to present a united front, with German Chancellor Olaf Scholz saying Russian missile strikes showed it was "right to stand together and support Ukrainians". Earlier US President Joe Biden said Russian President Vladimir Putin was counting on Nato and the G7 to "splinter... but we haven't and we're not going to".

However, BBC diplomatic correspondent James Landale, who is at the summit, says Western unity over the war has faltered in recent weeks, with some leaders discussing long-term relationships with Russia and others stressing strong, lasting support for Ukraine.

The BBC's political editor Chris Mason reports that some UK government officials fear France, in particular, is losing its appetite for the long-term slog of the war as domestic political pressure mounts.

The G7 summit in Bavaria will be followed by a Nato meeting in Spain later in the week at which Mr Zelensky is also expected to speak.

This summit has a broad agenda, from tackling climate change to helping poorer countries with infrastructure. But Ukraine continues to dominate.

The G7 leaders are expected to offer more support and further sanctions on Russia. But even Boris Johnson - one of Mr Zelensky's most vocal supporters - admits defending Ukraine's sovereignty has tough consequences for the rest of the world, particularly the rising costs of food and energy.

That's why the leaders of South Africa, Indonesia, India and Senegal have been invited to join the summit today, to discuss what more can be done to tackle global inflation. One idea being looked at is a cap on the price of Russian oil.

line
Russia's missile strikes targeted Kyiv, the central city of Cherkasy where one person died and the Kharkiv region in north-eastern Ukraine, along with Chernihiv in the north and Zhytomyr and Lviv west of the capital. The strike on Starychi district in Lviv was just 30km (19 miles) from the border with Nato member Poland.

Some missiles were launched from Tupolev bombers over the Caspian Sea, some 1,450km (900 miles) away, Ukraine's military said. Others were fired earlier from Tupolevs flying over neighbouring Belarus.

In Kyiv a nine-storey apartment building had its upper floors ripped apart. A seven-year-old girl was injured and underwent surgery. Her condition was later described as stable. Her mother - a Russian citizen - was also pulled from the rubble.

Kyiv Mayor Vitaliy Klitschko said the attacks were an attempt to intimidate Ukraine ahead of the G7 summit.

In eastern Ukraine Russia has taken Severodonetsk after weeks of fighting that has reduced much of the industrial city to rubble.

Ukrainian troops are thought to have withdrawn to the nearby city of Lysychansk, which sits on higher ground across the Siversky Donets river.

It is one of the few remaining areas in Luhansk region still in Ukrainian hands. Luhansk together with neighbouring Donetsk form the Donbas region and President Putin says gaining control of the Donbas is Russia's main war aim.