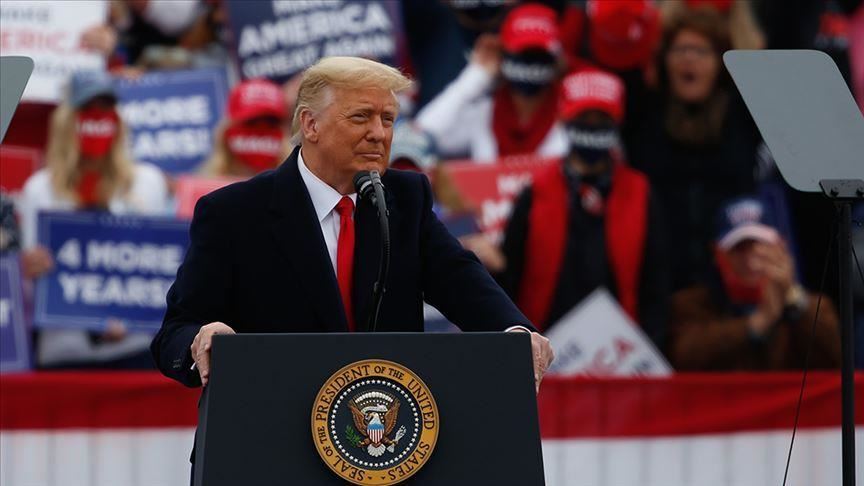 "This election is not over," White House press secretary Kayleigh McEnany told a news conference. "Far from it."

She made a flurry of allegations of election corruption, although no evidence of systemic fraud that might have influenced the result has emerged.

Mr Trump, a Republican, has not conceded the race.

What are Biden and Trump up to?
Since media projected on Saturday that Mr Biden had won the critical state of Pennsylvania, accumulating enough votes to claim the White House, the president-elect has forged ahead with his plans to take reins of the power.

Mr Trump took to Twitter on Monday to again dispute the outcome, making unsubstantiated claims of "unthinkable and illegal" activity in the vote.

The General Services Administration, which manages federal agencies, has held off on allowing Biden aides to formally begin the transition, saying no "ascertainment" on an election winner had yet been made.

CBS News, the BBC's US partner, says the Biden team is considering their legal options if the Trump administration continues to stall the handover.

White House reporters have been saying that despite his objections Mr Trump is expected to begrudgingly leave office in January and is already talking about running for the White House again in 2024.

What is the Trump campaign alleging?
At Monday's news conference, the president's spokeswoman and a Republican bigwig cited allegations of electoral corruption, while urging reporters to help investigate the unverified claims.

Fox News, formerly the president's favourite news channel, cut away from the event, citing the lack of evidence.

"Whoa, whoa, whoa," said presenter Neil Cavuto. "Unless she [Ms McEnany] has more details to back that up, I can't in good countenance continue to show you this."

Ms McEnany told reporters: "We have only begun the process of obtaining an accurate, honest vote count."

She claimed Republican poll watchers had not been granted adequate access to vote counts in the city of Philadelphia, Pennsylvania.

According to the Philadelphia Inquirer, both Republican and Democratic election monitors were kept from 13ft to 100ft (4m to 30m) away from tables where votes were being tallied in the city, and local election officials cited coronavirus prevention needs for the distancing.

According to the Inquirer, some Pennsylvania counties allowed voters to amend such mistakes, while others did not.

Republican National Committee chairwoman Ronna McDaniel said they had collected 131 affidavits, or signed legal statements under oath, in Michigan as part of their investigation into alleged election irregularities.

"If the shoe were on the other foot," she said, "if it were this close the other way, if President Trump was in the lead in all these states, and the media would be screaming, 'This isn't over'."

What is the latest legal action?
The Trump campaign filed a lawsuit on Monday in a Pennsylvania federal court, seeking an emergency injunction to stop state officials from certifying Mr Biden's victory in the state. The state's Attorney General Josh Shapiro called the lawsuit "meritless".

Republican-controlled state prosecutors meanwhile threw their weight behind the president's challenge to the election results.

The 10 state attorneys general filed a so-called amicus brief at the US Supreme Court backing the Trump campaign's case in Pennsylvania.

Also on Monday, the US Department of Justice reportedly authorised state prosecutors to investigate any alleged voting irregularities in the presidential election.

In a memo cited by US media, Attorney General William Barr wrote that such inquiries "may be conducted if there are clear and apparently-credible allegations of irregularities that, if true, could potentially impact the outcome of a federal election in an individual State".

Mr Barr said prosecutors should only look into "substantial allegations" of irregularities, and that "specious, speculative, fanciful or far-fetched claims" should be ignored.

The New York Times reports that the justice department official who would have overseen such investigations, Richard Pilger, has quit in response to Mr Barr's memo.

What about counts in the other states?
Results in last Tuesday's presidential election from the states of Georgia, Arizona, North Carolina and Alaska are still outstanding.

In Georgia, where the tally is continuing and Mr Biden leads, its secretary of state hit back on Monday at fellow Republicans who have criticised his handling of the election.

Brad Raffensperger, whose office oversees Georgia's election, said: "Was there illegal voting? I am sure there was. And my office is investigating all of it.

"Does it rise to the numbers or margin necessary to change the outcome to where President Trump is given Georgia's electoral votes? That is unlikely."

States must resolve recounts and court contests over the results by 8 December. The outcome will be finalised when members of the US Electoral College meet on 14 December.

How are top Republicans reacting?
Senior members of the president's party have largely refused to pressure Mr Trump to concede.

"Let's not have any lectures, no lectures," the Kentucky senator said on the floor of the upper chamber, "about how the president should immediately, cheerfully accept preliminary election results from the same characters who just spent four years refusing to accept the validity of the last election and who insinuated that this one would be illegitimate too if they lost again - only if they lost."

He added: "The president has every right to look into allegations and to request recounts under the law and notably the Constitution gives no role in this process to wealthy media corporations."