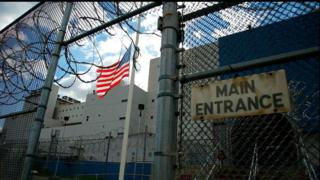 US jails are to let out inmates as cases of coronavirus infections are being reported in prisons.

Prison reform advocates say those in jail are at higher risk of catching and passing on Covid-19.

New York City Mayor Bill de Blasio said on Wednesday that city officials will this week identify individuals for release, including people who were arrested for minor crimes and those most vulnerable to infection due to underlying health problems.

His announcement came hours after a guard and a prisoner tested positive for coronavirus at Rikers Island prison, where disgraced former Hollywood producer Harvey Weinstein, 68, is a high-profile inmate.

Weinstein will be moved to a different state prison, an official said on Wednesday.

Other New York prisons, such as Sing Sing, have had inmates test positive for coronavirus and one employee for the stateâ€™s corrections department has died from it.

What have other US jurisdictions done?

â€œOur population within our jails is a vulnerable population just by who they are, where they are located, so weâ€™re protecting that population from potential exposure,â€ Los Angeles Sheriff Alex Villanueva told reporters earlier this week.

The LA County jail system is the largest prison system in the world with an average population of around 22,000 prisoners.

Mr Villaneuva disclosed that arrests in the county are also down, from an average of 300 per weekend to only 60 in mid-March.

Cuyahoga County, Ohio, where the city of Cleveland is located, has also released hundreds of prisoners due to coronavirus concerns.

Judges held emergency hearings through the weekend to work out plea deals and other agreements to allow prisoners to be released early or without serving time.

Several states from New York to California are now banning in-person visitors. A ban on visits led to a deadly prison riot in Italy last week.

Federal agencies will postpone most arrests and deportations during the coronavirus crisis.

What is the danger to prisoners?

Reform campaigners say prisoners face unique risks, due to a lack of hygiene in overcrowded cells and hallways.

Handcuffed people cannot cover their mouths when they cough or sneeze, sinks often lack soap and hand sanitiser is considered contraband due to its alcohol content.

Iran has already released 85,000 people, including political prisoners, in an effort to combat the pandemic.

The US locks up more of its citizens per capita than any other country, with an estimated 2.3 million people behind bars in federal, state and local prisons.

Some high profile convicts have argued for early release over coronavirus fears.