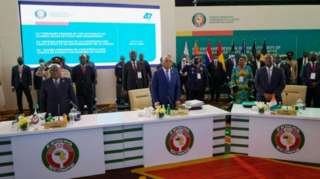 West African leaders have announced the lifting of sanctions against the military regime in Mali.

The heads of state of the Economic Community of West African States (Ecowas) meeting in the Ghanaian capital, Accra, accepted a proposal by the Malian military to hold elections and return to civilian rule by March 2024.

The bloc had imposed crippling economic sanctions after army officers staged two coups in less than a year in August 2020 and May 2021.

It also accepted a two-year timetable for the restoration of democracy in Burkina Faso, but told Guinea, a third country which has witnessed a military takeover, it would face economic sanctions unless it could speed up its proposed three-year transition back to democracy.