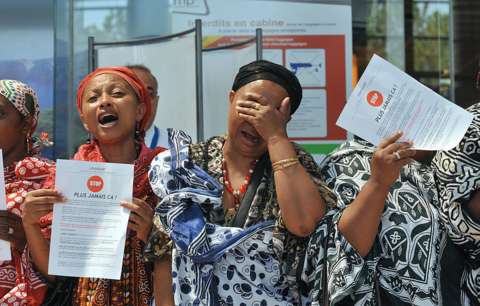 A French court has convicted Yemenia Airways for involuntary homicide over the 2009 crash off the Comoros islands which killed 152 passengers on board.

The only survivor was a 12-year-old girl.

The Airbus A310 set off from the Yemeni capital and was headed towards the Comoros.

Many of those on board began their journey in Paris or Marseille on another jet operated by the national airline of Yemen, before boarding flight IY626 in Sanaa.

The crash caused anger amongst the Comorian community in France as people complained that the aircraft had been in poor condition.

Officials from Yemen previously said the plane had undergone a thorough inspection and conformed to international standards.

It is not clear what the current findings of the French court were with respect to the cause of the crash, as the AFP news agency reports experts told the court there was nothing wrong with the aircraft.

However, AFP says that prosecutors accused the airline of having a pilot-training programme that was “riddled with gaps”.

The prosecutors also said the aircraft did not have functional landing lights, according to AFP.