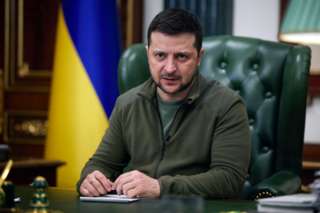 In an impassioned, late-night video address, he said heavy weapons which could defend freedom in Europe were instead gathering dust in stockpiles.

Mr Zelensky complained that Russian aircraft could not be shot down with machine guns.

"What is Nato doing? Is it being run by Russia? What are they waiting for? It's been 31 days. We are only asking for 1% of what Nato has, nothing more," he added.

Slovakia's prime minister, Eduard Heger, confirmed to the BBC that his country was willing to send its arsenal of Soviet-made S-300 air defence missiles to Ukraine if a replacement could be provided.