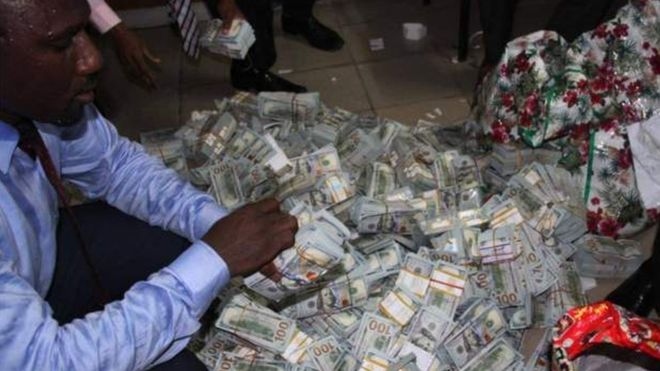 More than $43m (Â£34m) has been seized from a flat in Nigeriaâ€™s main city, Lagos,Â the BBC has reported.

Officials raided the flat after a tip-off about a â€œhaggard-lookingâ€ woman in â€œdirty clothesâ€ taking bags in and out of it, the agency added.

The money was believed to be from unlawful activity, but no arrests have as yet been made, the agency added.

This is the latest in a series of raids which uncovered bundles of cash in Nigeria, Africaâ€™s biggest economy.

Apart from US notes worth $43.4m, investigators found nearly Â£27,800 and some 23m naira ($75,000) at the four-bedroom flat in Lagosâ€™s affluent Ikoyi area, the Economic and Financial Crimes Commission (EFCC) said in a statement.

The â€œneatly arrangedâ€ cash was stashed in â€œsealed wrappersâ€ in wardrobes and cabinets in the seventh-floor flat, the EFCC added.

Guards told investigators that no-one lived in the flat, but a source reported that a â€œwoman usually appeared on different occasions with Ghana Must Go bagsâ€, the EFCC said.

â€œShe comes looking haggard, with dirty clothes but her skin didnâ€™t quite match her outward appearance, perhaps a disguise,â€ it quoted a source as saying.