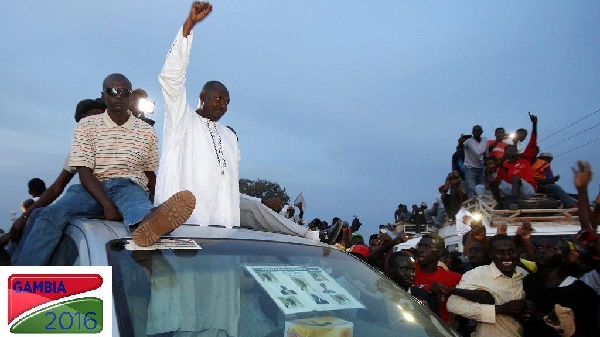 A new era appears to be dawning in The Gambia as countryâ€™s long time president has lost the presidential election held on Thursday December 1.

The president-elect is a 51-year-old businessman called Adama Barrow.
He was born in a small village near the market town of Basse in the east of Gambia.

Barrow is a relatively new comer to frontline politics in the Gambia. Until about six months ago, he was just a businessman who was largely unknown as a politician.
He was however thrust into the political limelight following the jailing of top officials from the United Democratic Party (UDP) in July.
Seven political parties and an independent candidate opted to join forces to field a unifying figure. That candidate was Adama Barrow.
Adama Barrow moved to London in the 2000s for further studies. Whiles there, he reportedly worked as a security guard to raise money to complete his studies in Real Estates.
He returned to his native Gambia in 2006 to set up Majum Real Estate, a property company, managing private estates.
Adama Barrow was thrust into the presidential race in September, a many felt put the odds against him.

But he was certain he could make a difference telling AFP in an interview that: â€œOur chances are great. People have shown us tremendous support,â€ a support he was confident will lead him to â€œwin and with a bigger marginâ€.
And rightly so he delivered a massive victory for the opposition in Thursdayâ€™s election with 45.5 percent of the votes as against 36.7 percent secured by incumbent president Yahya Jammeh.

Barrowâ€™s victory which effectively draws the curtain on Jammehâ€™s 22-year rule, for some Gambians, did not come as a surprise as he is said to have strong grassroots support.
Barrow has been critical of the jailing of opposition politicians and he is promising to promote an independent judiciary as well as freedom of the media and civil society.