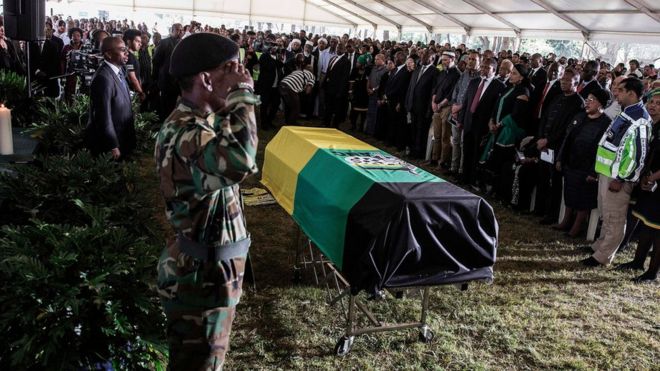 South Africa's President Jacob Zuma has not attended the funeral of veteran anti-apartheid activist Ahmed Kathrada at the request of his family.

Mr Kathrada called on Mr Zuma to resign last year after he became mired in a series of corruption scandals.

Ex-President Kgalema Motlanthe got a rousing applause from mourners when he repeated Mr Kathrada's call.

Finance Minister Pravin Gordhan, who is at risk of being sacked by Mr Zuma, also received a standing ovation.

Mr Kathrada, 87, was buried in the main city, Johannesburg, following his death on Tuesday.

He was jailed alongside Nelson Mandela for fighting against white minority rule.

Mr Kathrada spent more than 26 years in prison before his release in 1989.

He later served as an adviser to then-President Mandela in South Africa's first democratically-elected government.

Mr Zuma had ordered the national flag to fly at half-mast following his death and had postponed a cabinet meeting so that officials could attend the funeral.

However, Mr Zuma did not attend the funeral and would not attend a memorial service later this week "in compliance with the wishes of the family," a government statement said.

Mr Kathrada's wife, Barbara Hogan, is known to be a fierce critic of Mr Zuma.

Mr Kathrada was a member of the governing African National Congress (ANC), which is led by Mr Zuma.

Mr Kathrada was a simple man - that was the sense you got at his funeral.

There was nothing lavish or grand in sight, just a tent filled with people from all walks of life to show their love for Uncle Kathy, as he was affectionately known, one last time.

While some of South Africa's top leaders were present, they did not receive any special treatment.

The sombre mood was quickly overtaken by an unmistakable desire to "speak truth to power".

Speaker after speaker decried what they said was the moral decay and corruption in the Zuma-led government.
And while people were mourning, there seemed to be a greater commitment to protect South Africa and its democracy - and that is perhaps the most fitting tribute to Mr Kathrada.

Mr Kathrada wrote to Mr Zuma last year, asking him to resign after South Africa's highest court ruled that he had breached the constitution by failing to repay government money used to upgrade his private rural home in Nkandla.

In a separate case, another court ruled that Mr Zuma should be charged with corruption over a 1999 arms deal.
He denies any wrongdoing, and has refused to resign.

Mr Motlanthe, the keynote speaker at the funeral, said that "on a day like this we should not mince our words".

To cheers from mourners, he read excerpts of Mr Kathrada's letter and said that the anti-apartheid veteran was "deeply disturbed by the current failure of post-apartheid politics".

"Today, we close his eyes permanently. During his life, he opened ours forever," Mr Motlanthe said.

Mr Gordhan shed a tear when Neeshan Bolton, the executive director of the Ahmed Kathrada Foundation, paid tribute to him.

South Africa's media has been rife with speculation that Mr Zuma plans to sack Mr Gordhan, in a move aimed at giving him and his allies greater control over government finances.

However, the ANC's top six leaders are evenly split over Mr Zuma's plan, with three of them, including Deputy President Cyril Ramaphosa, opposed to it, Reuters news agency quoted unnamed sources as saying.

On Monday, Mr Zuma ordered Mr Gordhan to cut short a trip to the UK, where he was meeting leading businessmen in an attempt to persuade them to invest in South Africa.