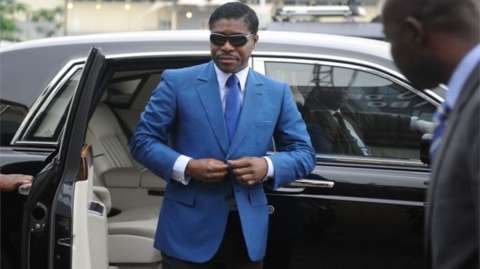 Share
A court in France has adjourned the corruption trial of Equatorial Guinea's flamboyant Vice- President Teodorin Obiang Nguema after his lawyers asked for more time to prepare his defence, AFP reports.Â  Mr Obiang, the son of the president,Â  is accused of buying a mansion and sports cars in France with a fortune amassed from oil-rich Equatorial Guinea's public funds.
Â
His lawyers sayÂ heÂ is not a "big-time bandit".
Â
The trial is the first following an unprecedented investigation into the French assets ofÂ  African leaders accused of leading a life of luxury abroad while their citizens live in poverty.
Mr Obiang is being tried in absentia.
Â
Last month, the International Court of Justice rejected a bid by Equatorial Guinea's government to prevent the trial from going ahead, arguing Mr Obiang had diplomatic immunity.