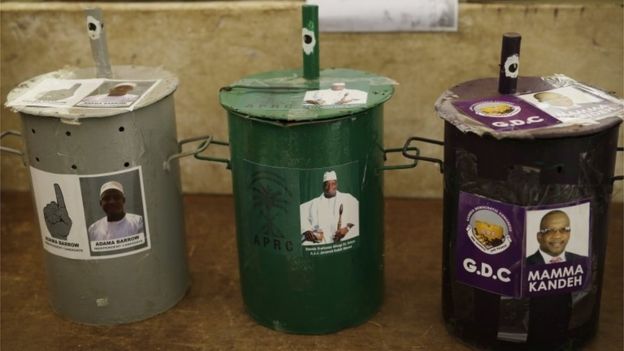 The Gambia has banned the internet and international phone calls as presidential elections are held in the West African state.

Officials have also banned demonstrations to prevent unrest after the elections.
Estate agent Adama Barrow is challenging President Yahya Jammeh, who says divine intervention will give him a fifth term.
The Gambia has not had a smooth transfer of power since independence.

The BBC's Umaru Fofana in the capital, Banjul, says long queues have formed at polling stations.
The Gambia has a unique way of voting for their president.
Instead of using ballot papers, voters put a marble into a coloured drum for their candidate.
The system is aimed at tackling illiteracy and preventing rigging.
In the 2012 election, only two votes were declared invalid after people placed their marbles on top of drums.

Observers say Mr Barrow, who, according to British news reports, was once a security guard in the UK high street store Argos, has generated fresh enthusiasm among opposition supporters.
Human rights groups accuse Mr Jammeh, who has in the past claimed he can cure Aids and infertility, of repression and abuses.
Several previously better-known opposition leaders are in jail after taking part in a rare protest in April.
Observers from the European Union (EU) and the West African regional bloc Ecowas are not attending the vote.
'Destabilisation'
Gambian officials expressed opposition to the presence of Western observers, but the EU says it is staying away out of concern about the fairness of the voting process.
The African Union however has despatched a handful of observers to supervise the vote.
The Gambia, a tiny country with a population of less than two million, is surrounded on three sides by Senegal and has a short Atlantic coastline, which is popular with European tourists.
The results of the election are not expected to be announced immediately.

Mr Jammeh took power in a 1994 coup.
Ahead of the vote, rights groups expressed concern over a possible flare-up of violence.
However, campaigning passed off almost smoothly without a major incident.
On Tuesday Mr Jammeh warned his rivals against contesting the outcome of the vote.
"Our election system is fraud-proof, rig-proof, you cannot rig our elections," he said.
"There is no reason that anybody should demonstrate. [Demonstrations] are the loopholes that are used to destabilise African governments.''
Mamma Kandeh of the Gambia Democratic Congress is also in the race.

This poll in The Gambia is different.
An unprecedented number of people turned up at opposition rallies ahead of the election.
For a country that has known only two presidents since independence from the UK 51 years ago, its mostly young population is yearning for change.
The economic challenges besetting this small West African nation have forced many to make the perilous journey to Europe, with some drowning on the way.
President Jammeh has said he will rule for a billion years if Allah wills.
Mr Barrow says he wants to bring the country back from the brink and restore human rights and true democracy.
Mr Jammeh's supporters say he has spread education and health care to remote parts of the country.
However, his critics accuse him of repressive tendencies with many dissenting voices either killed, jailed or forced into exile.