I went to Nigeria to meet the man who scammed me 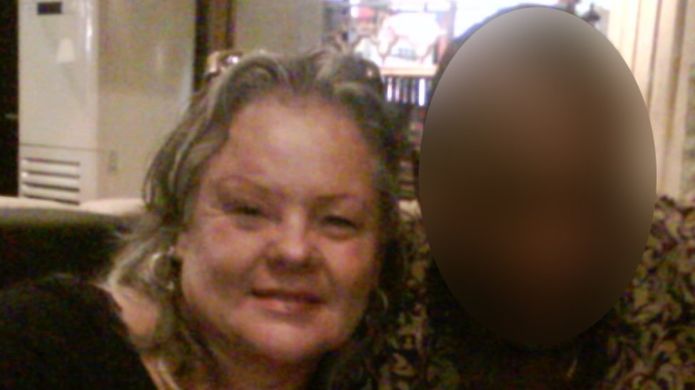 When Maria Grette first discovered that the 58-year-old Danish man with whom she had fallen in love was actually a 24-year-old Nigerian 419 internet scammer, the 62-year-old Swede was distraught. But, soon, her feelings changed.

She became consumed with what she describes as "a profound need to make a difference to the people of Nigeria".

Ms Grette's relationship with Johnny (not his real name) began after an evening of fun and games with her girlfriends, during which they playfully created a profile for her on an online dating website. A few years before, she had gone through a traumatic divorce, and her friends teased her about finally starting a new relationship.

But when the fun of creating her profile was over, Ms Grette, who works as an arts teacher, painter and arts therapist, didn't give much further thought to the website. 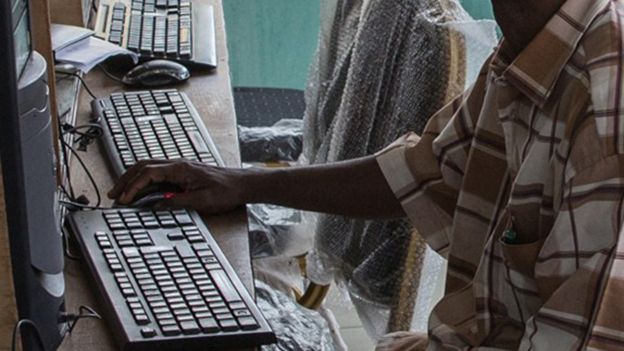 "I received messages telling me that people had contacted me, but I never looked at them," she said.

"I still don't know why," she said. "It was like a sudden impulse happening before I could stop it."

That particular message was from a man who described himself as a Dane raised in South Carolina, USA; a civil engineer working on a contract in England; a widower with a son in a Manchester university. 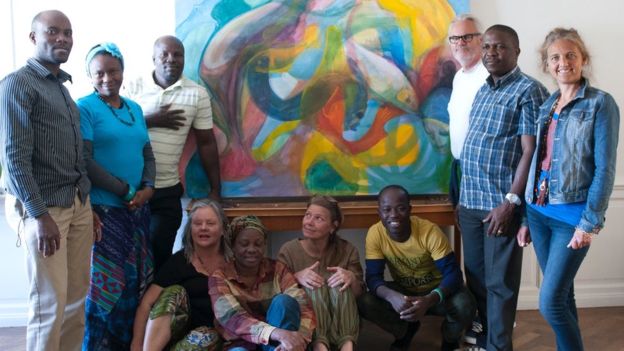 "I was caught up by the atmosphere and by something in his words," she said.

Johnny: "I wish I could see through your eyes and see what you like to see"

Maria: "I like to see the truth, and often the truth is more beautiful and greater than people dare to realize"

Johnny: "You talk in parableÂ´s. I canÂ´t wait to see you"

Maria: "I cant understand how you can think so dedicated of me, when you have never met me. That scares me."

"We spent some time writing, then he called from a UK number."

Ms Grette, who had lived in different countries across Europe, was surprised that she could not place the man's accent. She mentioned this to him but didn't give it too much thought.

He told her that he was planning for his retirement; had Sweden in mind for a place to settle; owned a house in Denmark inherited from his parents; wanted to leave that to his son, Nick, who was very attached to it, while he looked for a new home for himself in Sweden.

"I wanted to meet him because I liked him," she said. "He had a way and a sweetness I had never known in a man before. And he was innocent in a way that puzzled me."

Ms Grette put all these qualities down to "an old fashioned upbringing and an isolated life - living in hotels and spending his free time on golf courses owing to much travelling".

After three months of communicating, the man agreed to come over and visit her in Sweden. But before that, he and his son needed to make a quick trip to Nigeria for a job interview, he said.

Johnny called to let her know that he was at Heathrow Airport. And to say that he had landed in Nigeria. He also got her to speak with Nick. The next phone call was to tell her that he was in a Lagos hospital.

They had been mugged, his son shot in the head, and they were without money and papers.

Unfortunately, his bank did not have a branch in Africa, he added, so it would take time to transfer money from his UK account. Meanwhile, the hospital management was requesting â‚¬1000 to proceed with treatment.

"Honey, I am in the hospital right now using the doctorÂ´s laptop to send you this message so you can know my situation. Honey, if Nick dies I will also die with him, I have been crying, I wish I could call you, I wish I never came here, I will never forgive myself for bringing Nick along with me. I will call you with the doctorÂ´s phone and send you an email later if I have the chanse.

"Honey, I am happy to hear from you and I am still at the hospital. The doctor said we where lucky we where not kidnapped. The bank does not have a location in Africa, so it will take time to get money and the management are requesting 1000 euros to proceed with treatment. Nick is all I have got and I will not forgive myself if anything happens to him. I am confused, and I do not know where to turn at the moment......"

"I will never forget how I rushed to the Western Union office, trembling while I did the transfer," Ms Grette said.

"All I could think of was to get the two persons in Nigeria out of danger."

Several thousands of euro later, in what she describes as "coming to her senses", Maria realised that something was amiss.

She stopped responding to his messages.

Three weeks after her silence, he called her and confessed. He told her that he was not who she thought he was.

"I said I already knew that. I asked him to tell me his true identity and he did."

He was a 24-year-old Nigerian 419 scammer. He had finished university two years earlier but had no job.

He further described himself as a "devil" who had wronged "a lovely woman".

"He said he had never met anyone like me before, that he had been fighting his feelings for me for a long time. He said his scamming mates had warned him about falling in love with a 'client', that he had ignored them because he trusted me and did not want to lose contact with me."

From this point on, their communication took a new turn. There were no further requests for cash.

"The attraction I started feeling was to the person who was revealing himself to me... It was still him, but with a new name and different age and circumstances," she said.

Johnny sent her a photograph of himself, but Maria was not satisfied with that.

"I wanted to meet him," she said. "I could not live with this relationship unless it was adjusted to reality in all senses."

Unable to get him a visa to travel to Sweden, she made up her mind to go to Nigeria.

In October 2009, Ms Grette travelled to Africa for the first time in her life.

"When I saw him at the airport in Abuja, tears fell over his face, and I knew I had known him all my life."

Ms Grette described her two weeks in Nigeria as blissful, a period during which she and Johnny succeeded in transforming their romantic feelings for each other into a good friendship.

She met his friends, many of whom were also scammers. It was while enjoying their company one night in a local bar that she began to wonder how she could make a difference.

"I asked myself what I could do to prevent a situation where healthy, good young men fall into this trap," she said.

An idea came to her two years later, in 2011, after she saw an article on a Nigerian news website about an arts exhibition.

Over the past six years, Ms Grette has arranged for a number of African artists to visit Europe for arts exhibitions, workshops, conferences and competitions.

She has assisted them to source international grants and other funding to advance their work.

She has also visited Uganda to give talks on art, and is looking forward to another visit to Nigeria scheduled for later this year.

Ms Grette, now 69 and living in Norway, is elated at the opportunity to improve the lives of these young artists.

"Johnny has given me more than he took," she said, "Without him, I would not have met Africa."

When she'd visited him in Abuja, Johnny promised Ms Grette that he would give up scamming.

With her assistance, he left Nigeria shortly afterwards, to study in America.

Although they have not met each other again since, she continued to provide him with financial assistance until he completed his degree a few years ago and got a job in the American oil sector.

They still communicate frequently, updating themselves on each other's lives; and last year, he bought one of her paintings which she shipped over to him in America.