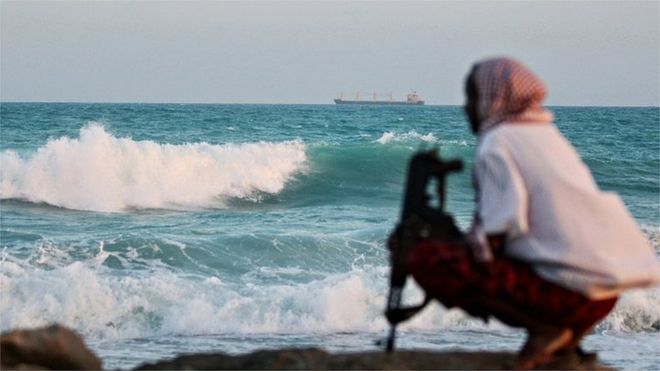 Share
Somali pirates have hijacked an Indian cargo ship off the coast of the semi-autonomous region of Puntland, officials there say.
One source said the vessel was heading towards Somali shores. There were no details of the crew or destination.
Some two weeks earlier an oil tanker en route to Mogadishu was seized by pirates who then released the boat apparently without conditions.
That incident was the first hijack off the Somali coast since 2012.
"We understand Somali pirates hijacked a commercial Indian ship and [it is heading] towards Somalia shores," Abdirizak Mohamed Dirir, a former director of Puntland's anti-piracy agency, told Reuters news agency.
The privately-owned Daynile website said that attack happened some 50km (30 miles) south of the port town of Hobyo.
Billion dollar industry
Piracy off the Somali coast - usually for ransom - has reduced significantly in recent years, in part because of extensive international military patrols as well as support for local fishing communities.
At the height of the crisis in 2011, there were 237 attacks and the annual cost of piracy was estimated to be up to $8bn (Â£7bn).
The factors that drove many Somali coastal fishermen to become pirates nearly a decade ago are still there, says the BBC's security correspondent Frank Gardner.
Somalia is currently in the grip of a famine. Poverty is widespread with few employment options for young people.
There is also continued local resentment at the poaching of fish stocks off the coast by Asian trawlers.
BBC
Â