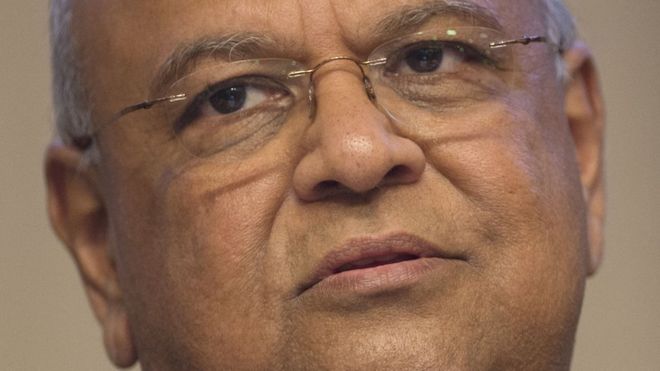 Share
South Africa's Deputy President Cyril Ramaphosa has described the sacking of Finance Minister Pravin Gordhan as "totally unacceptable".
His late-night dismissal on Thursday led to a 5% plunge in the value of the currency, the rand.
Mr Gordhan was seen as a bulwark against corruption in an administration that is facing growing criticism.
He was one of several victims as President Jacob Zuma conducted a major overhaul of his cabinet.
Mr Zuma said the midnight reshuffle was about a "radical socio-economic transformation".
Mr Ramaphosa told state broadcaster SABC that he would not resign in response to the sacking but continue to "serve the people".
Why has this caused such a fuss?
Pravin Gordhan was seen by many as a safe pair of hands when it came to managing the economy.
He was keen to keep a tight rein on spending and resisted calls from the president to increase government expenditure.
This was Mr Gordhan's second stint as finance minister after first serving from 2009 to 2014.
He was reappointed in 2015 to replace brought in little-known David van Rooyen, less than a week after he took over from Nhlanhla Nene.
Why was he sacked?
It is unclear why Mr Gordhan was sacked but local media are pointing to an alleged intelligence report which accuses him of working with foreigners to undermine Mr Zuma's administration.
In a spirited farewell press conference at the treasury's office in Pretoria, Mr Gordhan defended his economic record, and dismissed speculation that he had recently held meetings in London aimed at undermining the president.
The two men did not see eye to eye on government spending, the BBC's Milton Nkosi reports, and that led to a rift between them. Ultimately, though, this is being seen as a political issue with Mr Zuma rewarding loyalists.
Earlier this week, the president recalled his finance minister from planned events in the UK.
Last October, Mr Gordhan was charged with fraud, but the charges were later dropped.
He has described the allegations as politically motivated.
What is being said about the sacking?
Comments by the Deputy President Cyril Ramaphosa that Mr Gordhan's sacking was "totally unacceptable" captures the overwhelming sentiment of some top leaders in the ruling African National Congress (ANC).
ANC chief whip Jackson Mthembu said Mr Gordhan and his deputy Mcebisi Jonas had integrity and were incorruptible.
The Anglican Archbishop of Cape Town, Thabo Makgoba, has said the cabinet sackings "constitute an assault on the poor of South Africa".
ANC Youth League leader Collen Maine has however praised the cabinet changes calling the new Finance Minister Malusi Gigaba "experienced and intelligent".
What impact could this have? Lerato Mbele, BBC News
The rand is experiencing a setback just when it had started to recover from the political uncertainty and international volatility that plagued it in the past year.
The bond markets, this is where government debt is sold and the values are directly linked to the prospects of the economy have also reacted negatively.
For foreign investors that is a boon, but for South African taxpayers subsidising the state it does not represent value for money.
Ultimately ordinary people will feel the pressure of these political moves, a weaker currency means the cost of basic imports such as fuel and some foods will go up.
A country whose reputation is dented, may ultimately lose face with international ratings agencies and finally be downgraded to "junk status" when the economic assessments are done again in June.
What other changes have been made?
Apart from the nine ministers who have been affected by the changes Mr Zuma also appointed 10 deputy ministers.
Sfiso Buthelezi will become Deputy Finance Minister, replacing Mcebisi Jonas.
"I have directed the new ministers and deputy ministers to work tirelessly with their colleagues... to ensure that the promise of a better life for the poor and the working class becomes a reality," President Zuma's said in a statement.
Source: BBC
Â