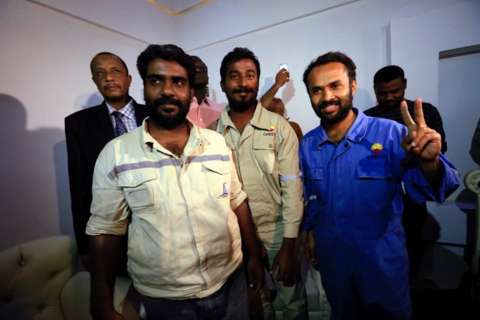 Three foreign oil workers seized by rebels earlier this month in South Sudan have arrived in the Sudanese capital, Khartoum, following their release from captivity.

The men, two Pakistani nationals and one Indian, were released on the orders of rebel leader and former vice president Riek Machar, his SPLA-IO group said in a statement.Â

One of the released men said his rebel captors had told him to pass a message to foreign oil companies to stop operating in South Sudan because oil revenues were being used to fund war.Â

Oil is the main driver of the country's economy.

There were no orders given in relation to locals seized alongside the foreign workers, who would continue to be held, a rebel spokesman said.Â

South Sudan has been devastated by more than three years of civil war and a famine was declared in parts of the country last month.