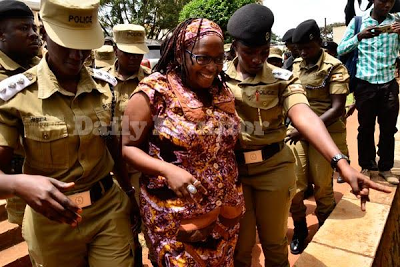 Share
The bail hearing for the Ugandan activist who is charged in connection with calling President Yoweri Museveni a "pair of buttocks" has been adjourned for 20 minutes because Ms Nyanzi collapsed as she tried to get up, the BBC's Patience Atuhaire reports.
She was helped up and led away by prisons officers.
One of her lawyers told Patience that Ms Naynzi has been diagnosed with malaria.
The case has been seen as a test for the boundaries of freedom of speech in the country.
People are sharing pictures of some of her supporters outside the court.
BBC
Â