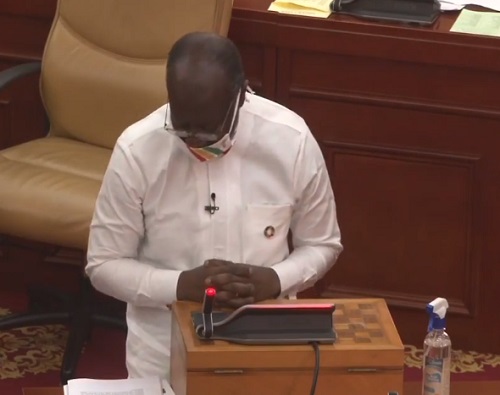 Finance Minister, Ken Ofori Atta says the days of Highly Indebted Poor Country, HIPC is behind us as a country.

Speaking on the floor of parliament during the Expenditure in Advance of Appropriation presentation, Ken Ofori Atta said those who mismanaged the economy for the NPP government to come and fixed it are the ones wishing ill for Ghana.

"Ironically those who mismanaged the economy for us to come and fix it are the ones wishing Ghana ill, our message to them is this there is no turning back, HIPC is behind us, economic mismanagement is behind us the economy is stronger today than it was four years ago."

The International Monetary Fund (IMF) has also denied classifying Ghana as a Highly Indebted Poor Country (HIPC) based on data on its website.

According to an e-mail responds based on some questions sent to the Fund in Washington DC, it said any interpretation to that effect “may be deceptive.”

This follows claims by the flagbearer of the National Democratic Congress (NDC) that the country has been categorised back under HIPC due to what he believes is economic mismanagement by the governing NPP.

Speaking at a Professionals Dialogue series in Accra on Monday, John Mahama said the IMF forecasts Ghana’s current rate of borrowing and debt at 76.7 per cent debt to GDP ratio.

“The IMF in its Sub-Saharan African Regional Economic Outlook forecast the current rate of borrowing and debt at a frightening 76.7% debt to GDP ratio.

Government has already debunked these claims describing it as fake news which must be taken with a pinch of salt.

However, in a correspondence with JoyBusiness, the Fund argued that the list on its website are for all countries that have been on the HIPC program since 1996 are regularly updated.

It added, “this must not be interpreted as a new HIPC list, any such interpretation is flawed and may be deceptive the IMF added.”

Read the full statement from IMF below.

We have been made aware of (social) media reports stating that Ghana has recently been added to the list of Heavily Indebted Poor Countries (HIPC) by the International Monetary Fund (IMF). As a result, we would like to provide the following clarifications:

The HIPC Initiative is essentially CLOSED for countries that have already reached the Completion Point.

As you may recall, Ghana successfully reached the Completion Point in July 2004.

The list of countries that have qualified to the HIPC Initiative since inception in 1996 is regularly updated on our website and MUST NOT be interpreted as a new “HIPC list”.

Any such interpretation is flawed and may be deceptive.

Also, the recent update of Ghana’s debt-to-GDP ratio has NOT triggered any decision or action by the IMF. For ease of reference, you can access the latest issue of the Fund’s Regional Economic Outlook for sub-Saharan Africa on our website.

We would like to take this opportunity to encourage you to seek clarification before giving credence to rumor involving the IMF in Ghana. We reserve the right to issue a public statement to make such clarifications as needed.