Anglogold Ashanti to recruit over 2000 workers for Obuasi mine 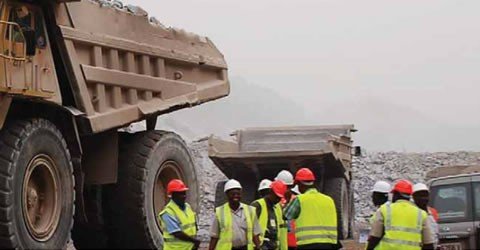 Mining giant, AngloGold Ashanti, says it is planning to recruit about 2,500 workers following its resolve to resume full-scale operations at its Obuasi mine.

The Managing Director of the company, Mr Eric Asubonteng, made this known at a Town Hall meeting organised by the mining giant with stakeholders in Obuasi.

Mr. Eric Asubonteng also gave updates on various projects that are underway to bring the company back into full operations.

He said workers in the mines are putting up their very best to ensure that between now and the end of 2019, a lot would be done to get the company to a point where it can operate at about 50% capacity while the plant would be able to produce 2000 tones per day of materials mined from underground.

He said moving forward, the company is looking at recruiting more from the Obuasi community as it has already employed about 1,167 locals out of, 1,870 current workers which will rise up to 2,500 or more in future.

The General Manager also mentioned that AGA has submitted it’s labour plan to the Minerals Commission in which the organization’s structure had been clearly spelt out to train more youths to help grow and develop more Ghanaians including people from Obuasi.

He assured the audience that in the company’s bid to diversify the economy of Obuasi, the company is bringing on board all businesses in Obuasi by awarding some major contracts to contractors from Obuasi including renovation of 1,500 house units in Obuasi.

The Education and Health sectors are areas the company is highly focused on to ensure socio-economic development within the Municipality as well as the District level.

On his part, the Executive Vice President Group Technical and Planning, Anglogold Ashanti, Mr. Graham Ehm gave his general remarks on the redevelopment of the mine by revealing to the gathering that a previous meeting had taken place in Accra recently between Government, Management and shareholders of the various mining companies which CEO of Anglogold Companies Worldwide was present and views were collectively shared on how to develop Obuasi into a more conducive place for indigenes.

He also indicated that management and it’s investors are excited about the progress seen so far as it is more clearer that the company is working well with Traditional leaders, Government and all other stakeholders including community members.

He said the management was overwhelmed after visiting the deeps or underground section of the mine to witness greater development which has already been done.

Mr Graham emphasized greatly on what the outcome of the successful cooperation between the company and it’s stakeholders to be able to revamp the Obuasi Mine would go a long way to ensure development in Obuasi and Ghana at large.

He also praised Adansi Traditional leaders and Government for their interventions in the initial stages to bring the redevelopment of the Obuasi Mine into a reality.

He maintained that the company would then be able to produce it’s first household gold by December 2019 while a lot of work is required to ensure increments of up to 4,000 tonnes per day by the end of 2020.

Concerns were raised by participants while many were much excited on the progress made by the company since it’s official reopening last January by the President, Nana Addo Dankwa Akufo-Addo and the Asantehene, Otumfuo Osei Tutu.

The rest are Adansi Traditional leaders led by Nana Serwa Bruwaa, Queen Mother of Akrokerri, Assembly members, media, and other representatives of the Obuasi communities.