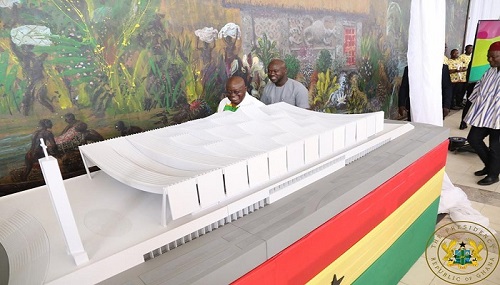 The Ghana Institute of Architects, GIA, says the principal architect at David Adjaye & Associates is unqualified to execute projects awarded his firm.

According to the Ghana Institute of Architects, the government has unfairly awarded 12 different contracts to the firm.

Speaking to Citi FM, Secretary to the Association of Architects, Augustus Richardson said, "If you look at the register which publishes yearly which has been published now 2019 you will see that David Adjaye is on the list of temporarily registered firms there is a problem there because he is not registered with Ghana Institute of Architects and when you read the law there are two things that you will need, your registration with the Institution and a payment of a fee....."

A Ghanaian Architectural firm, Design and Associates Development Consortium, has also petitioned the President, Akufo-Addo, over possible bias in the award of 12 state projects to David Adjaye & Associates.

The architectural firm run by Sir David Adjaye has already courted controversy because of its work on the National Cathedral and the new Parliament complex.

Design and Associates argue that these two projects, in addition to others like the Marine Drive Master Planning, Trade Fair Centre redesign and the GNPC Accra Head Office, were not awarded fairly.

“Our concerns are premised on the total and absolute disregard and non-adherence to principles of transparency, fairness, equity and the laws governing the procurement of professional services by stature companies and bodies.”

The firm is raising concerns over Mr. Adjaye’s legitimacy to practice in Ghana because he is not a resident per the Architects Decree (NRCD 357).

“The negative impression and image is being created in the public that locally trained Architects and Engineers are incompetent and not qualified to undertake such projects in the country which is totally untrue.”

But the crux of the local architecture firm’s complaints had to do with the procurement process which it described as “bizarre.”

It maintained in the petition that David Adjaye & Associates was selected “contrary to all notions of fairness to carry out projects when it is clear that anyone firm would be overburdened by projects of such magnitude.”

In addition, Design and Associates rubbished assertions of fairness in the selection process for at least the controversial new Parliament complex.

In an attached letter responding to the Ministry of Lands and Natural Resources, it described the competition for the design of the new Parliament complex “a complete hoax.”

It said local firms were excluded from discussions on the projects with various state institutions.

“Therefore, for the same individual or firm to be presented as a winner of the supposed competitive bidding process is most scandalous. It cannot be said that the public offices involved in the decision process were not biased, prejudiced and influenced in their decision making because of the several meetings held with Adjaye and Associates.”