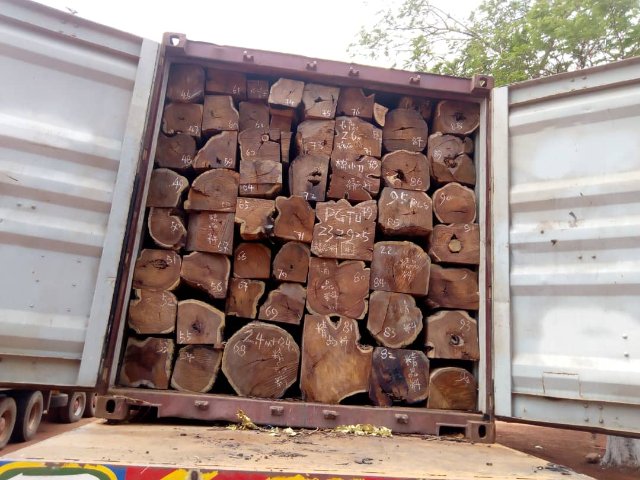 The Forestry Commission has disclosed that over 300 containers of rosewood have so far been impounded in their effort to enforce the total ban placed on rosewood.

Reacting to issues of illegal exportation of rosewood on GBC's news analysis programme "Behind the News", Chief Executive Officer of the Forestry Commission, Kwadwo Owusu Afriyie said as a result of their intervention most of the illegal operators have been arrested.

"The truth of the matter is that it was as a result of the intervention of the forestry commission that the ministry extended the ban on rosewood and its activities, so first we have from time to time arrest people who are engaged in this illegal logging and cutting of this rosewood, quite recently, since the ban we have impounded running into hundreds of trucks in fact at the port alone we have over three hundred containers that have found its way to the port and we've managed to retrieve all and impose a hefty fines on them, so this one such activity where this Chinese woman was arrested by the forestry commission, and then the police got involved in that and the rest is history."

"We are actively involved in the clamping down of all activities, we have the mandate to ensure that rosewood and all other timber species are protected and we are doing all we can so that people who illegally engage in this trade will be apprehended and prosecuted," he added.

Speaking on the challenges being faced by the commission, the CEO said despite all their efforts people still engage in the illegal activity.

According to him, the same applied to other areas of law enforcement, where the laws are there but people still engage in illegal activities.

"We have checkpoints at all the routes that we know but people can still evade those checkpoints, when they find their ways to the port we are able to arrest them even at the port level, so it not as if ones you have the ban all activities will stop it doesn't work like that and I have never known any country where in spite of all the numerous laws and regulations crime doesn't go on.."

He added that request has been made for more hands and vehicles to be purchased to help effectively fight illegal operators in the forest, he also said issues of some staff helping the illegal operators have been reported to them which was dealt with but two of their staff were also shot dead in their line of duty.

"We have put in a request through our ministries to the government to support us we need even more hands and we are waiting for the clearance from the ministry of finance to enable us to employ more additional hands."

A Chinese national has been arrested by police in the Northern region with four containers of Rosewood timber.

Helena Huang, 41, was accompanying the truckloads of the timber when she was apprehended at the Vitting Barrier by the police.
The suspect told the police that she has permission to transport the wood to Tema. She also insists that she has a resident permit to be in Ghana.
Huang was, however, unable to produce any document to support both claims. She told the police and the media that one of her assigns is bringing the conveyance documents and her passport.

The Crime Officer, however, noted that there is a ban on the cutting, harvesting and transportation of Rosewood so Huang’s defence is far-fetched.

“But we have commenced investigations into the case,” he told journalists.

The Lands and Natural Resources Ministry has placed a total ban on the harvesting and exporting of rosewood.

The Ministry has directed the Forestry Commission to suspend the processing of permits for the exportation of rosewood.

As at August 2017, the Ministry of Lands and Natural Resources had permitted 25 companies to salvage rosewood from the Brong-Ahafo, Upper East, Upper West and Northern Regions.

A ban was first placed on the harvesting, transportation, export, sale or processing of rosewood in the country in 2014.