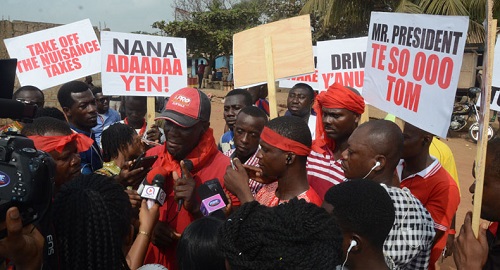 The Chamber of Petroleum Consumers (COPEC) has petitioned the Speaker of Parliament over the proposed increase in components of the Energy Sector Levies (ESLA) which will lead to increase fuel prices.

COPEC in its petition said the “current fuel price increase is coming at the wrong time.”

“This eventually shall lead to an increase in the current fuel price by about four percent,” COPEC surmised.

The petition outline’s a series of cautions with COPEC highlighting the effect fuel price increases could have on lives of Ghanaians.

“It shall affect every aspect of the economy and could bring serious challenges to the standard of living of persons and their purchasing ability. This shall increase the cost of living of the ordinary Ghanaian, through increased transportation cost to vehicle owners and users.”

COPEC also insisted that the “ordinary consumer in the energy sector would be worse off and should not be made to pay for recurring debt ostensibly created by inefficiencies of the state-owned enterprises.”

In addition to the economic concerns, COPEC noted the toll the increase in fuel prices could have on the environment.

“As a country committed to curbing the menace of climate change, COPEC is of the opinion that, when the LPG price increases, people will be demotivated in attempt to move from non-environmentally friendly fuels to LPG, hence derailing the aim of government’s LPG penetration target.”

COPEC believes that government can source for alternative means of revenue generation “including employing prudent measures to check perennial leakages in the energy sector where the state loses over GH¢1.6 billion yearly to fuel smuggling.”

It also suggested the revamping and equipping State-Owned Enterprises like TOR to make the “more productive and profitable.”

COPEC’s Executive Secretary, Duncan Amoah has already indicated that it will protest the increase in the ESLA levies if attempts at dialogue are unsuccessful.

“We will resort to some initial dialogue to ensure that whatever he [the Finance Minister] is proposing. Either Members of Parliament will reject it or not allow it to materialise. But if they still insist or push forward, we will not go on a demonstration, we will go on a sleepover.”