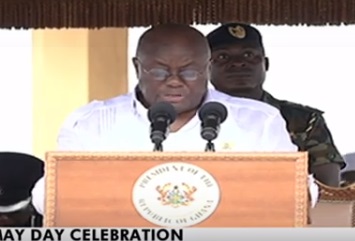 President Akufo-Addo says government will by 2020 settle the over GH¢3 billion arrears owed to the Social Security and National Insurance Trust (SSNIT).

According to President Akufo-Addo addressing workers at this year's National May Day celebration in Accra on Wednesday, the Ministry of Finance has already arranged for the payment of GH¢200 million and a bond of GH¢700 million towards the retirement of the arrears owed to SSNIT this year, which has been outstanding for more than six years.

“As I told you last year, over GH¢3 billion of pension funds that had been outstanding for six years and about which TUC has been largely complaining were transferred in 2017 from the Temporary Pensions Fund Account (TPFA) at the Bank of Ghana to the appropriate occupational pensions scheme”.

“I’m informed that the Ministry of Finance has arranged for payment of GH¢200million and a bond of GH¢700 million towards the retirement of the arrears owed to SSNIT. This will leave arrears of GH₵800 million which will be included in next year’s budget,” he added.

Acknowledging that there were unresolved issues with SSNIT and the National Pensions Regulatory Authority (NPRA), President Akufo-Addo said he had tasked the Minister of Employment and Labour Relations to liaise with the two bodies to bring finality to all outstanding issues in the next three months.

Bemoaning the poor living conditions of some pensioners, President Akufo-Addo said he would ensure that a universal pension scheme is instituted to ensure a robust economy and prosperous society for all.