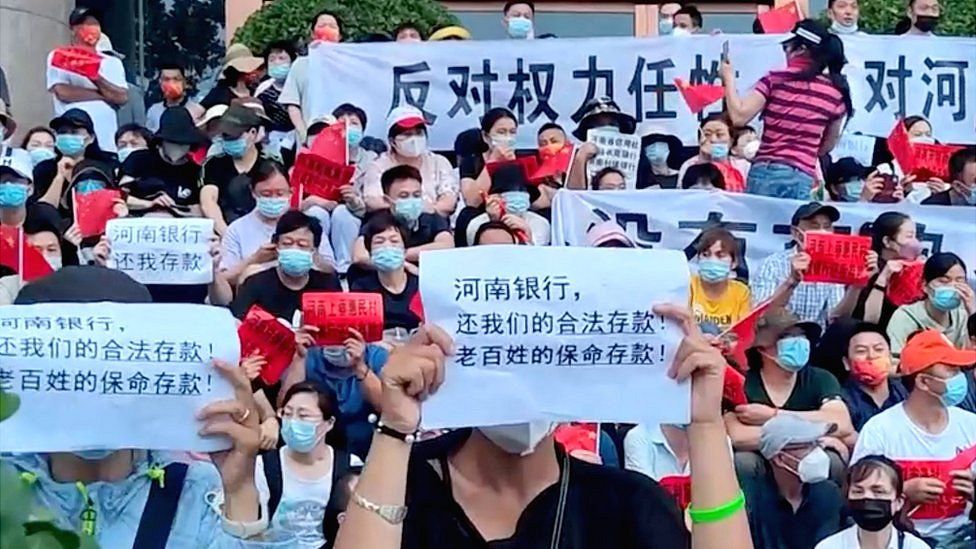 Authorities in China's Henan province say they will start releasing money to customers who have had their funds frozen by several rural banks.

The announcement came just a day after a rare protest in Henan's capital, Zhengzhou, turned violent.

Payments will be made in batches from this Friday, local regulators say.

The four banks that were the focus of the protests are believed to have frozen a total of 39bn yuan ($5.8bn; £4.9bn) of deposits.

In a statement on Monday, the Henan Banking and Insurance Regulatory Bureau and the Henan Provincial Local Financial Supervision Bureau said "advance payments" would be made to customers through a local association supervised by China's central bank.

The regulators asked customers to contact the association from 09:00 local time (02:00 BST) this Friday.

On Sunday, a protest over the frozen deposits - which was attended by hundreds of people - in Henan's capital, Zhengzhou, turned violent after a clash with a group of unidentified men.

The demonstrators said the banks had frozen their deposits because of supposed upgrades to their internal systems in April, but had not communicated with them since then.

Local media reports said police were present at the demonstration and had told protesters to leave.

Videos on social media showed a group of unidentified men - believed to be security personnel but dressed in plain-clothes - shoving the protesters and throwing water bottles at them.

One protester, who had travelled to Henan for the demonstration, told BBC Chinese about the protestors being attacked.

"A group of people without police uniforms [on] rushed towards us. They hit us hard, especially [the] men," said the protester, who wanted to be identified only as Ms Wang.

Separately on Sunday, local police said that they had arrested "a number of suspects" linked to the case and were making progress in their investigations into the banks, without mentioning the protests.

The police said the suspects were believed to have controlled a number of banks in the province through a parent company.

Since then, thousands of customers have been travelling to Zhengzhou to attempt to withdraw their money.

Small protests have erupted, culminating in a large demonstration on 23 May where thousands took to the streets, before police shut it down.

Some bank customers who had visited Zhengzhou later said they had experienced issues with their Covid-19 tracing app, which is necessary in many Chinese cities for residents to enter buildings and shops, use public transport or leave the city.