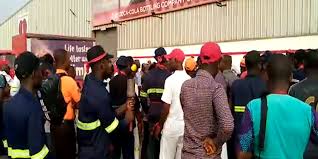 Management of the Coca-Cola bottling company says they are engaging all parties about the issues that have led to workers agitation.

Public Affairs and Communications Manager for the company Bethel Yeboah reacting to series of protests from the workers for the former MD Adu-Baah to be reinstated said management will officially respond to all concerns by tomorrow, January 30.

"Mr. Adu-Baah our former MD and the business are no longer in that employment relationship as it has been put out there, whatever are the other issues involved therein, there are discussions that are ongoing of which the business will put out an official response and a statement to that tomorrow morning......" he said in an interview with Citi FM.

Workers of Coca-Cola bottling Company Ghana Limited continue to demonstrate on the premises of the company as they seek the reinstatement of the former MD, Seth Adu-Baah.

The workers held four demonstrations since they started the mass action last Thursday.

Assistant Secretary of the local chapter of the Industrial and Commercial Workers Union of Coco-Cola Company Goerge Sarpong said the workers will resist the appointment of a new MD.

According to him, the demonstration is a strong message to the President and the Minister of Industry that a member of the management team wants to layoff all Ghanaian directors in the company.

He alleged that the said management member of the company has succeeded in some other African Countries in laying off all Africans in director positions.

"We want to send a clear and a strong signal to the President and the Minister of Industry that there is this man called Felix Gomez who's agenda is to layoff all Ghanaian Managing Directors in executive positions in Coco-Cola, he has done that in Liberia and he has succeeded that in SeriaLeone and in The Gambia, but we are saying no way in Ghana, we will indeed be citizens and not spectators.."