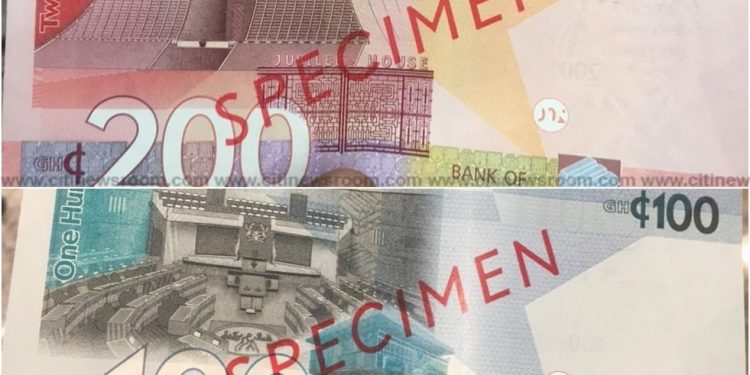 A number of agencies and market women were consulted by officials of the Bank of Ghana (BoG) for their inputs into the decision that went into the introduction of the GH¢200 and GH¢100 notes, Mr. Phillip Ottoo, Director of Research at the BoG, has revealed.

Speaking at a training workshop for members of the Institute of Financial and Economic Journalists (IFEJ) in Koforidua on Saturday, November 30, Mr. Ottoo explained that the BoG did not spring a surprise on Ghanaians with the new notes.

He said it took 2 years of research work to arrive at the decision to usher in the new notes.

“The introduction of the new notes was a result of 2yr research work that was done. It started in March 2017. After the research, the conclusion was that still 70 percent of the population still rely on cash”

He added: “The BoG visited market centres, spoke to market women and other agencies and the conclusion was that still about 70 per cent of people still rely on cash for their activities.”

The Governor of the central bank Dr. Ernest Addison has announced that a new GHS100 and GHS200 notes have been introduced by the Central bank.

He announced these at a press conference in Accra on Friday, 29 November 2019.

He said: “As is the normal practice in all jurisdictions, Central Banks do periodically undertake a review of the structure of their currencies with the view to making sure that they are aligned with macroeconomic conditions and demand.

“In fact international best practices requires monetary authorities to review their currency regimes at intervals of between five (5) and ten (10) years with the aim of ensuring that demand for banknotes are well aligned with economic activity, address weaknesses and challenges associated with the management of notes and coins in circulation, assess the non-usage of a particular series to ensure efficiency in printing, and address technological innovations that impact the usage of currencies.”

“A lot of thinking went into the decision to introduce the higher denomination banknotes. The structure of the banknote should align well with the needs of the people who use it for their daily transactions. We need banknotes and coins that are convenient for most people to use, high quality, secure and cost-effective.

“Accordingly, in March 2017, the Bank of Ghana begun a process of conducting a thorough review of the structure of the currency including on the note/coin boundary and acceptability and use of the individual currency series.

“The review exercise which involved conducting a nationwide survey with market operatives, businesses, and international stakeholders as well as some empirical exercise. The outcome of these exercises revealed the resurgence of deadweight burden issues on the economy due to past significant inflation and perennial depreciation of the currency, the significant increase in the demand for higher denomination banknote and increased cost of printing.”