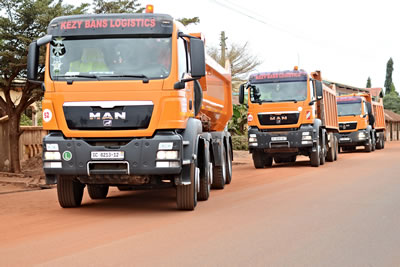 The usual energy and bustle that one can witness at the Tema Port Transit Terminal has been downed by the coronavirus pandemic, which seems to be pulling the brakes on the haulage business.

Shocks to supply chains and reduced industrial activities that have curtailed cargo traffic through the port mean there are fewer products to be moved by both transit and domestic hauliers, and this is impacting harshly on businesses on that side of the shipping value chain.

“There is significant dormancy within our sector, even though the few that are able to access cargo can still go on transit trips. Generally, the cargo isn’t easily available as it used to be and, as a result, we have a lot of our members just idling,” Ibrahim Musa, Executive Secretary of the Joint Association of Port Transport Union (JAPTU)—a body of about 5,000 members consisting of nine Ghanaian transport associations including truck owners, truckers and hauling companies—told Business24.

He added: “We are operating not more than 20 percent of our capacity currently compared to the virus-free period. We are caught between the devil and the hard place, but we are focused on the protocols that have been put in place to contain the virus, hoping that things return to normalcy soon.”

In the meantime, their hope hangs on prudent measures that have been deployed by the Ghana Ports and Harbours Authority (GPHA) to facilitate trade at the ports which, according to Musa, was easing their pain.

“The GPHA and GSA [Ghana Shippers’ Authority] have deployed certain protocols that allow agents and freight forwarders to access cargo as and when they are available. Our situation could have been worse if not for some of these arrangements,” Musa disclosed.

Those interventions, he said, were borne out of consultations with the GPHA and GSA.

The plight of the Ghanaian hauliers is further worsened by the non-compliance of their counterparts from the landlocked countries of Burkina Faso, Mali and Niger with a cargo-sharing deal which sought to promote fair competition in the trade.

“When transit cargo arrives at the ports, there is a 50-50 sharing mechanism for transporters on each side of the divide. But as it stands, these arrangements are not been adhered to, and that puts the Ghanaian transporter under much bigger crisis. [Now] when the cargo arrives, the people are looking for their compatriots to do the haulage,” Musa narrated, asking for speedy intervention from both the GPHA and GSA.

“Without the enforcement of such strict cargo-sharing mechanisms, Covid-19 becomes a much bigger enemy to us than it should be. When you have less cargo coming in as a result of the crisis and all of them are given to our counterparts to move, then it is a big problem.”

Despite the unfavourable conditions, they find themselves in, the association has resolved not to lay off workers because they believe that the situation should not be an excuse to take such an action.

Instead, they are poised to diversify their operations to, among others, include the moving of cargo internally.

Musa told Business24: “The hauliers will have to look elsewhere or within to see what cargo they can move around internally because the trucks, when parked for long, become even more expensive to maintain.”