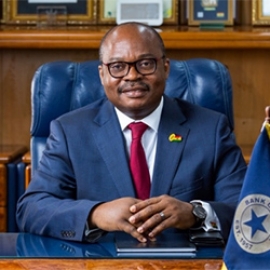 The tenure of the Governor of the Bank of Ghana, Dr. Ernest Addison has been renewed by President Akufo-Addo for another four years.

But President Akufo-Addo has given his approval for Dr. Addison to continue for another four years, pending the approval of the yet-to-be constituted Council of State, from April 1, 2021.

The President back in 2017, forwarded Mr. Addison’s name to the Council of State for consideration and approval as the Governor of the central bank.

He filled the vacancy left by the resignation of the then Governor, Dr. Abdul Nashiru Issahaku, whose last day of engagement with the bank was March 31, 2017.

The council of state subsequently approved the nomination of Dr. Addison.

Dr. Ernest Addison has over 25 years of experience working in the central bank as well as international organizations.

In 2000 and on secondment, he was appointed the chair of a Special Task Force set up by the Authority of Heads of State of ECOWAS to lead studies culminating in the setting up of the West African Monetary Institute (WAMI) and subsequently appointed Chief Economist at the Institute.

He returned to the Bank of Ghana in 2002 where he served for nearly a decade as, the Bank’s Director of Research.

At the African Development Bank, Dr Addison worked as the lead regional economist for the Southern African region.

In this capacity, he led Dialogue Missions to many countries, including Mauritius, Lesotho, Swaziland, Angola, Zambia and technical teams in Preparation of New Country Strategy Papers (CSP’s) and mid-term reviews for Angola, Lesotho, Malawi, Mauritius, Mozambique, Sao Tome, and Zambia.

He also led the technical team for the study of the Indian Ocean Strategy including leading Missions to Seychelles, Mauritius and Madagascar.

He proceeded to McGill University, Montreal, Canada where he obtained a Doctor of Philosophy (Ph.D.) in Economics degree with specialization in Monetary Economics, Economic Development and International Economics.