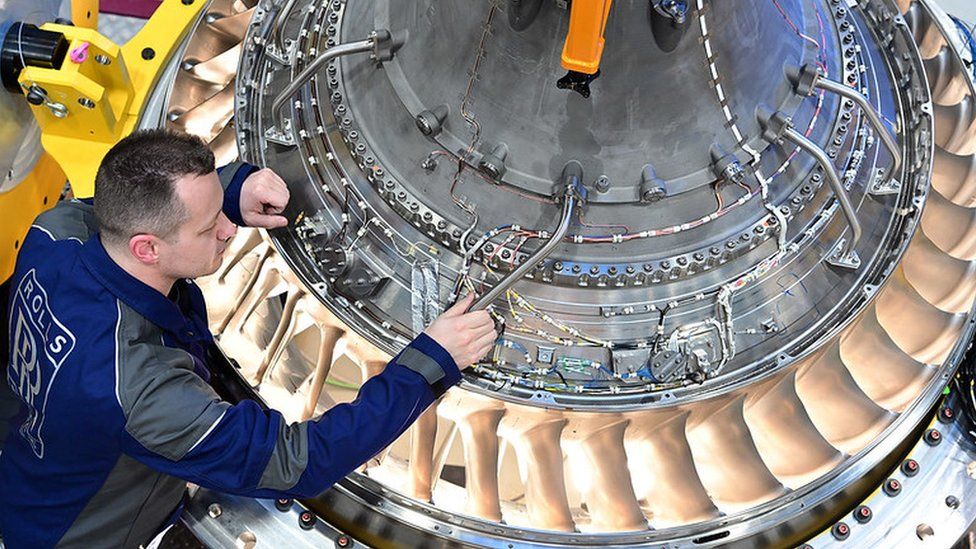 A union representing Rolls-Royce workers has rejected the offer of a £2,000 one-off payment from the firm to help its staff with the rising cost of living.

Unite said the offer "falls far short of the real cost of living challenges which our members are experiencing".

But Rolls-Royce said the offer was "fair" and "a good deal" for staff.

The lump sum, which was intended for junior management and shop floor staff, was due to begin being rolled out in August, starting with the 3,000 non-unionised staff before being paid to the remaining 11,000 unionised workers.

Unite's regional secretary Paresh Patel said the union was still in negotiations with Rolls-Royce about the pay offer.

News of the offer emerged on Monday night, and was later confirmed by Rolls-Royce.

However, Unite said: "The fact that Rolls-Royce has made this announcement in the way that it has certainly in our view undermines the trade union and the negotiating position that should be between the employer and the unions on this matter."

Rolls-Royce had also offered workers a 4% increase in pay, back-dated to March. A Rolls-Royce spokesperson had told the BBC it would be "the highest annual pay rise for at least a decade" for its shop floor staff.

But Unite said it would also reject that offer of a 4% pay rise.

There are ongoing discussions with unions about a pay settlement for 2022-2023, Rolls-Royce's spokesperson said, and the cost of living issue is to be a factor in those negotiations.

In response to Unite's rejection of the offer, the spokesperson said: "This is a good deal for our colleagues that is fair and competitive, with an immediate cash lump sum to help them through the current exceptional economic climate.

"We will continue to talk to our people."

Meanwhile, around 115,000 Royal Mail workers are voting on strike action in a similar row over pay.

The Communication Workers Union (CWU), which represents many Royal Mail staff, said it would be claiming for an "inflation-based, no-strings pay award", adding that Royal Mail's offer of a 2% pay award was "miles away from where inflation is, totally inadequate".

Pay rates and measures to help UK staff have been increasing as businesses have been seeking to recruit and retain staff, after official figures showed there were fewer unemployed people than job vacancies for the first time since records began.

Earlier this month, Lloyds Bank staff were offered a £1,000 lump sum to help with rising costs, after Unite the Union demonstrated outside its annual general meeting.

Inflation - the rate at which prices rise - currently stands at 9%, and is expected to increase again later this year.

It seems one-off cost of living payments are gaining in popularity among employers - but are they a short-term fix to a long-term issue?

The nature of inflation means that while the rate of price rises may slow next year, it is extremely unlikely that the cost of living will actually drop. Prices are almost certainly not going to fall.

Yet, these payments are not embedded in future wages, unlike a regular pay increase. As employees continue to find it tough, will there be pressure on bosses to make these payments a permanent part of pay next year and beyond?

There is undoubtedly an awareness among businesses that workers, particularly the lower-paid, need more financial help at the moment to cover their bills.

But perhaps this eye-catching tactic of one-off payments is directed more at another issue - the retention and recruitment of staff.

2px presentational grey line
Rolls-Royce was badly impacted by the global coronavirus pandemic, which hit demand for its aircraft engines as international air travel ground to a halt.

In 2020 it announced plans to cut its global workforce by 9,000 by the end of this year, with 3,000 of those jobs going in the UK. At the time it said it would take "several years" for the industry to recover from the pandemic.

In the first year of Covid, Rolls-Royce made a loss of £4bn because of the collapse in air travel, however it returned to profit in 2021.

Earlier this month, Morrisons said it would increase pay for its store workers as UK supermarkets battle for staff in the face of increasing competition in the sector.

Rival chains Tesco, Sainsbury's and Asda have also announced pay rises for their workers this year.

Indonesia: Fans 'died in the arms' of players in stadium crush