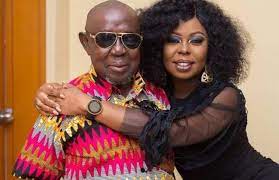 Popular Ghanaian comedienne and socialite Afia Schwarznegger has tattooed her father’s name and death date on her arms to honour him few days after his demise.

Her father Mr Augustine Adjei gave up the ghost on Monday, January 17.

Afia announced in an Instagram post that her father had taken his last breath after a prolonged illness.

She has since been updating her page with memories of him.

In another update, she showed a video of her new tattoo with her father`s name and a love sign to show how much she cherished him.

she also thanked the artist for doing what she called therapeutic work.

In a recent update, she also shared one of her fond memories with her late father.

She captioned it as follows: "Hey buddy. It’s been 7 days without you. Life is hell without you but I know for sure you are in heaven resting in peace. Promise to make you proud”.

Afia Schwarzenegger's friends and fans have since been sympathizing with her.