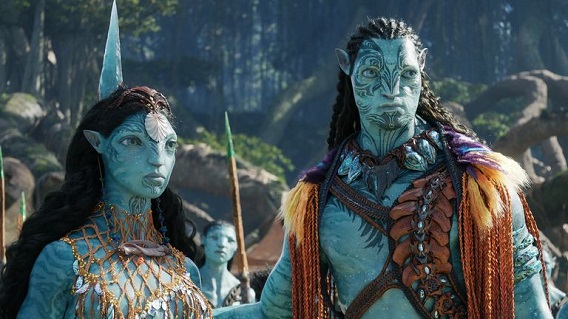 Thirteen years on, James Cameron's mega-budget Avatar sequel opens in cinemas next week, hoping to illicit that same appetite in cinemagoers for the 3D magic of the first.

While the medium has fallen out of favour, it remains Cameron's preferred choice of viewing.

But not only will cinemagoers need 3D glasses - coming in at a whopping three hours and 10 minutes, it also requires stamina.

With production costs totalling around £285m (up there with the most expensive films ever made), to make it worth Disney's while, the epic has to at least end up making it into the top five highest grossing movies of all time.

To do so, it needs audiences to want to see it more than once, which perhaps isn't too unreasonable when you factor in that a huge amount of the money generated in both of Cameron's previous blockbusters - Titanic and the first Avatar - came from cinemagoers paying to see the film's multiple times.

But in a cost of living crisis do we have the cash now?

The film sees Sam Worthington return to the role of Na'vi leader Jake Sully and is rooted around the family he now has with warrior Neytiri, played by Zoe Saldana.

"It's a mighty film, and very heart-wrenching.

"We all went through a pandemic together as a whole world, and that's a connection that we all have to each other... and it's about us being connected as individuals - I think that's very important to relate to and really take to heart."

"It's an experience so immersive and also takes your breath away," she told Sky News, adding that she will need to see the film once more to get the full experience from it.

The sequel also features Kate Winslet in the cast as the matriarch of an ocean-bound clan.

For the Oscar-winning actress it was a chance to work, once again, with the filmmaker who put her on the Titanic:

"He (Cameron) asked and I said yes. Why on earth would I not?," she told Sky News.

"Also, my children would never have allowed me to. They were like... just do it."

Cameron, who overtook his own movie, Titanic, with Avatar as the highest grossing film ever in 2009, has already set the wheels in motion for the next films in the franchise - and spent much of the last decade preparing.

"And then we started at full tilt five years ago... and then we shot two movies, actually part of the third one."

Cameron also describes his new sci-fi epic as a "love letter to the oceans".

"A lot of people [in 2009] picked up on the messaging around the rainforest and around the plight of indigenous cultures around the world.

"We have that in spades now because nothing has really got that much better - in the meantime, this one is my love letter to the oceans and a cry for people everywhere to be responsible for guardianship of the oceans."

Right now the Na'vi's survival might just depend on what happens off-screen more than on.

Avatar: The Way of Water is in cinemas on 16 December.