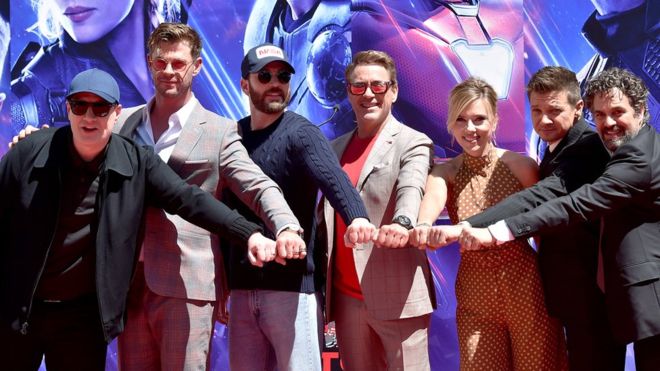 Avengers: Endgame has made box office history by taking a record-breaking $1.2bn (£929m) in global ticket sales in its opening run.

The Disney blockbuster has become the fastest film ever to break the $1bn barrier, doing so in just five days.

Endgame is the 22nd offering in the Marvel Studios superhero franchise.

In the US alone, Endgame - which stars Robert Downey Jr as Iron Man - brought in a record $350m, and also enjoyed the UK and Ireland's biggest opening ever with takings of £43.7m.

Read also: 10 Movies to watch out for this month

Empire journalist, Helen O'Hara, believes familiarity and investment in the Avengers characters is the key to the worldwide phenomenon and that the above figures should have a positive impact on the industry as a whole.

"There's been 21 previous films and people have got to know these characters and they really care about them," she told BBC News, "so we're desperately invested in everything that happens to them now.

"There was clapping in my screen, as well as cheering at certain points. It's really interactive at this point because we're just so invested".

She added: "There were stories this weekend of sold-out cinemas, people were going to see all the other films because they were already at the cinema.

"So I think it is good overall. There is a risk that it could suck up all the oxygen in the room from other films but the secret has always been make a good film and people will see it one day.

"I think if people get into the habit of going to the cinema to see these movies then they're likely to keep going to see the other ones as well".
The movie drew huge audiences in China, where it made a record $330.5m after opening there on Wednesday, ahead of North America.

Walt Disney Studios Chairman Alan Horn said in a statement: "Though Endgame is far from an end for the Marvel Cinematic Universe, these first 22 films constitute a sprawling achievement, and this weekend's monumental success is a testament to the world they've envisioned, the talent involved, and their collective passion, matched by the irrepressible enthusiasm of fans around the world".

The popular Avengers franchise began back in 2008 with Iron Man.

Endgame has received positive reviews from critics, with a 96% approval rating on Rotten Tomatoes.