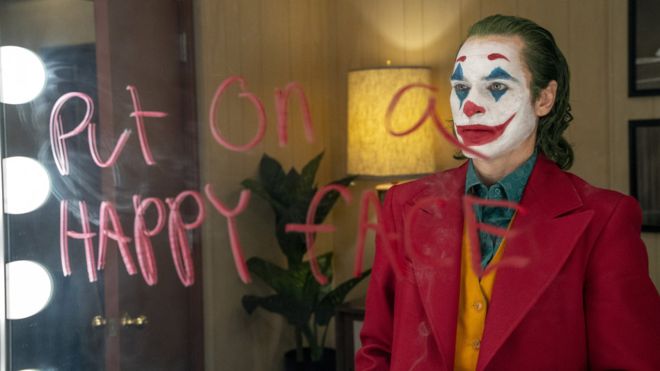 Joker leads the Bafta film nominations with 11, but there is criticism that the acting nominees are all white.

Joker is followed by Martin Scorsese's The Irishman and Quentin Tarantino's Once Upon A Time... In Hollywood, which have 10 nominations each.

Scarlett Johansson and Margot Robbie are up for two acting awards each.

But no female directors were nominated for the seventh year in a row. Bafta boss Amanda Berry said she was "very disappointed" by the lack of diversity.

Joaquin Phoenix will be the favourite for best actor for his role in Joker, which tells the origin story of Batman's nemesis and has divided some critics and audiences.

It's 11 years since Heath Ledger won a posthumous Bafta for playing the same character in The Dark Knight.

Joker director Todd Phillips said: "Recently, when Joaquin and I were in the UK, the love we felt for Joker was palpable and I just want to thank my British colleagues for connecting with the film on a cellular level."

Phoenix will face competition from Taron Egerton, who played Sir Elton John in Rocketman, as well as Leonardo DiCaprio for Once Upon A Time..., Adam Driver for Marriage Story and Jonathan Pryce for The Two Popes.

Margot Robbie is up against herself in the best supporting actress category for roles in Bombshell and Once Upon A Time...

That category also includes Scarlett Johansson for Jojo Rabbit, while she is also up for best actress for her role opposite Driver in Netflix's divorce drama Marriage Story.

The other best actress nominees are Renee Zellweger for playing Judy Garland in Judy, Jessie Buckley for Wild Rose, Charlize Theron for Bombshell, and Saoirse Ronan for Little Women.

But there is no room for Little Women film-maker Greta Gerwig - or any other women - in the best director category.

Told on BBC Radio 4's Today programme that the acting list "seems very white", Bafta CEO Berry replied: "I'm going to totally agree with you. That's how I felt when I first saw the list.

"This isn't being disrespectful to anybody who has been nominated because it's an incredibly strong list this year.

"If you look at the director category, where I hoped we would see at least one female director, that is an incredibly strong list when you have people like Martin Scorsese and Quentin Tarantino and Sam Mendes, who have got multiple nominations in the past."

Gerwig did pick up a nomination for best adapted screenplay, however.

The actors who were overlooked included British star Cynthia Erivo, who was recently nominated for a Golden Globe for her role in Harriet, a biopic about Harriet Tubman's escape from slavery.

The lists drew strong criticism on social media, with #BaftasSoWhite trending. Director Rapman, whose controversial film Blue Story was overlooked except in the rising star category, wrote: "The lack of of black faces is ridiculous."

Bafta's deputy chairman Krishnendu Majumdar said the lack of female nominees in the best director category was an "industry-wide problem" and that Bafta was "fiercely doing something about it" with its schemes like Elevate.

He added: "We can't make the industry do something, all we can do is encourage and push and inspire and try to help people coming in at the bottom end."

Metro film critic Larushka Ivan-Zadeh told BBC News that the lack of a nomination for Gerwig was "a real omission", while the main acting categories could have recognised Erivo, The Farewell star Awkwafina, and Us actress Lupita Nyong'o.

"Certainly when the list of actors came up, and it was wall to wall white faces for this year, it was very disappointing," Ivan-Zadeh said.

"Margot Robbie and Scarlett Johansson both had two nominations each - well done for them - but it just felt like you're using up spaces that could be perhaps used for different and more diverse performances. And it's not that the performances aren't there."

It said films would not be nominated for best British film or best British debut unless they met at least two of four "diversity standards", which cover on-screen talent, storylines, creative leadership, training and underserved audiences.

The BFI, which oversees the diversity standards scheme, does not publish details of which criteria each film met, but confirmed all nominated films in the two categories met the diversity criteria. Those criteria do not extend to the acting and directing awards.

There was more diversity on the shortlist for the rising star award, which was announced on Monday.

Ward has said his nomination was a vindication of the film following controversies around its screenings.

The gang drama was temporarily withdrawn from Vue cinemas after seven police officers were injured in a disturbance at Star City in Birmingham in November, where there were reports of youths with machetes.

Winners and nominees in most categories are voted for by 6,700 Bafta members, who are industry professionals and creatives around the world.

"In many areas, our voting membership is more diverse than the industry," a Bafta statement said. "However diversity continues to be an issue that needs to be tackled urgently within the industry, and Bafta continues to work hard to increase opportunities for underrepresented groups through all of our activities."

The ceremony will take place on 2 February at the Royal Albert Hall in London, hosted by Graham Norton.

This year has also seen the introduction of a category for best casting director - the Baftas' first new category for more than two decades - following a campaign last year to recognise that arm of the film industry.