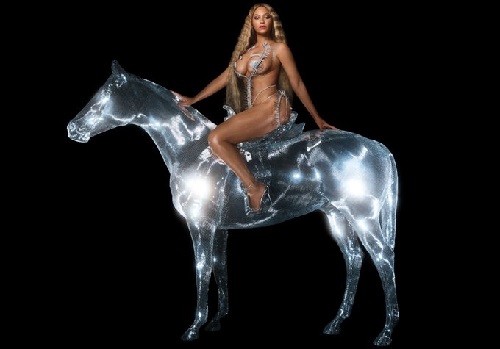 Beyonce has shared the official cover art for “Renaissance,” her seventh studio album, which is due July 29.

The artwork shows Beyoncé riding a shimmering, silver horse, her face turned to the camera. Revealing the cover via Instagram, she explained the album’s creation and what she hoped to accomplish.

“Creating this album allowed me a place to dream and to find escape during a scary time for the world,” she wrote Thursday. “It allowed me to feel free and adventurous in a time when little else was moving. My intention was to create a safe place, a place without judgment. A place to be free of perfectionism and overthinking. A place to scream, release, feel freedom. It was a beautiful journey of exploration.

“I hope you find joy in this music,” she continued. “I hope it inspires you to release the wiggle. Ha! And to feel as unique, strong, and sexy as you are.” It seems horse imagery might be a running theme for Beyoncé. Her new album cover is similar to how she was styled for her recent British Vogue cover, in which she straddled a red horse while wearing a black body suit.

In August, Beyoncé posed with a black horse for Harper’s Bazaar, and in July 2020 she sat atop a white horse in the “Black Is King” movie. Some fans are drawing parallels to the four horsemen of the apocalypse — whose colors are white, red, black and pale (symbolizing conquest, war, famine and death, respectively).

Ahead of the release of “Renaissance,” Beyoncé teased fans last week with “Break My Soul,” a bop that Times critic Mikael Wood deemed “a thumping 1990s-style house jam.”

The lengthy lead-up is a departure from the surprise nature of her past several albums — her self-titled release (2013), “Lemonade” (2016) and the joint album with her husband, Jay-Z, “Everything Is Love” (2018) — all of which arrived without warning.

Her last album to receive a traditional rollout was the critically acclaimed “4" in 2011, which leaked about three weeks early.