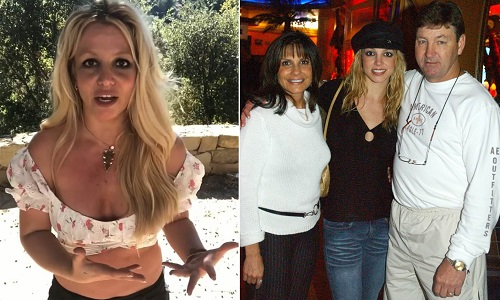 Britney Spears has said her parents should be in jail for controlling her life and finances for more than a decade, following a judge's ruling terminating her 13-year conservatorship.

Spears, 39, also joked that she may take after Meghan Markle and Adele and sit down with Oprah for a tell-all interview.

The video post comes days after a California judge freed the Grammy-winning singer from her conservatorship, a legal arrangement that controlled large aspects of her finances and medical decisions.

'I'm not even mentioning all the bad things they did to me which they should all be in jail for … yes including my church-going mother !!!!' Spears said in a caption

In the video, Spears shared what makes her happy now that Los Angeles County Probate Judge Brenda Penny gave her back full control of her personal and professional decisions on Friday.

Rumours had swirled that she was considering retiring altogether, though she's since shot those down.

'I've been on the conservatorship for 13 years. That's a really long time to be in a situation you don't wanna be in,' Spears said.

'Owning an ATM card, seeing cash for the first time, being able to buy candles. It's the little things for us women, but it make a huge difference.'

Spears, who has since announced that she's engaged to 27-year-old boyfriend Sam Asghari, said that she wants to use her case as part of her advocacy against unfair guardianship or conservatorships for people with 'real disabilities and real illnesses.'

She further criticized her parent in the video, saying, 'I lived with victims my whole life as a child that's why I got out of my house and I worked for 20 years and worked my a** off.'

The singer wore a floral print crop top with black jean shorts as she swayed back and forth while speaking into the camera.

She also hinted that she may sit down with Oprah to tell her story in full.

'I mean who knows … I do know how embarrassing it is to share the fact I've never seen cash or wasn't able to drive my car. But honestly, it still blows my mind every day I wake up how my family and the conservatorship were able to do what they did to me,' Spears said.

The 'Oops!... I Did It Again' singer was put under a conservatorship in 2008 after a series of personal setbacks, including losing custody of her two children.

Her personal and business decisions, including control of a $60 million fortune amassed over two decades of performing, were put in the hands of her father, Jamie Spears, who shared management with his business partner Lou Taylor.

The arrangement, usually reserved for severely incapacitated or elderly people, has been the subject of scrutiny in recent years as her fans raised their voices about it on social media.

When addressing the court publicly for the first time in June, Spears said her father and management team wouldn't even allow her to have an intrauterine birth control device removed because they don't want her to have children.

Spears has suggested jail time for her family before.

In June, she told the judge: 'Ma'am, my dad, and anyone involved in this conservatorship, and my management, who played a huge role in punishing me when I said no—Ma'am, they should be in jail.'

Spears has also previously criticized her mother, saying the conservatorship was her idea because her dad is 'not smart enough to ever think of a conservatorship.'

The pop star ended Tuesday's video by thanking her fans and the #FreeBritney movement, the dedicated cohort of fans who have spoken out about her legal situation.

'You guys rock, honestly. My voice was muted and threatened for so long and I wasn't able to speak up or say anything.

'Because of you guys, and the awareness of the kind of knowing what was going on and delivering that news to the public for so long, you gave it awareness to all of them,' she said.

'I honestly think you guys saved my life. In a way. 100 percent,' she added, appearing to hold back tears.

'I know there's a lot of jokes about the Free Britney movement: 'We're not free we're expensive.' OK, Birdies. I'm expensive too,' she said.