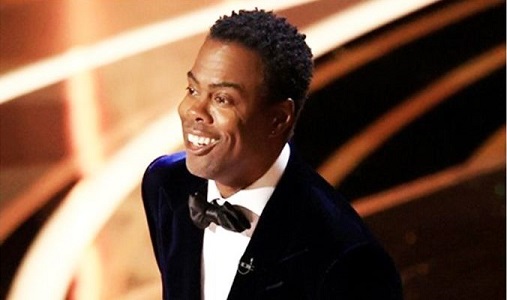 Don’t expect Chris Rock to be emceeing the Oscars anytime soon. According to multiple eyewitnesses, Rock revealed during his Sunday night show in Phoenix, that he was asked to host next year’s show, but refused.

As many will remember, it was at the 2022 Academy Awards that Will Smith slapped Rock in the face after he made a joke about Jada Pinkett Smith before presenting the award for Best Documentary Feature.

“Chris Rock said he was asked to host next year’s Academy Awards at his Sunday night show at Arizona Financial Theatre, and that he refused the offer,” one eyewitness shared.

“He also noted that he was offered the chance to do a Super Bowl commercial that he also declined.”

The eyewitness also told ET that Rock compared hosting the Oscars to returning to the scene of a crime, referencing the murder trial of O.J. Simpson, who was accused of killing his wife, Nicole Brown Simpson.

“Chris joked that returning to the Oscars would be like returning to the scene of the crime and said that it would be similar to asking Nicole Brown Simpson to go back to the Italian restaurant where she left her glasses,” the eyewitness added.

He continued to make light of the incident, though he did admit that getting hit by Smith hurt, a lot more than words do.

Calling Smith “Suge Smith,” another eyewitness said Rock talked about the incident for “a few minutes in a joking way” but kept his references to it “short and classy.”

While Rock spoke about the incident during his show, eyewitnesses told ET that Rock has no plans to speak to “any big outlet” or do a “sit down interview” to speak about what happened.